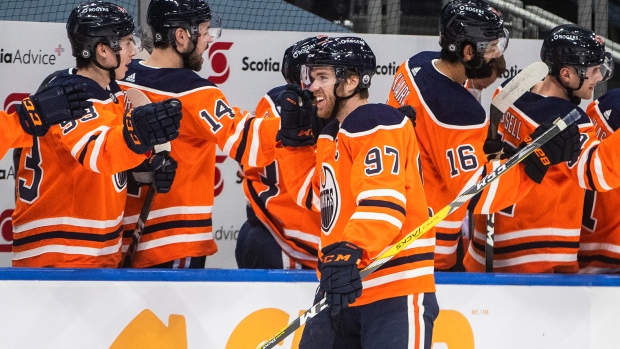 The Carolina Hurricanes have won eight straight games and were a perfect 3-0-0 last week. As a result, they sit atop our Power Rankings for the first time this season.

The Hurricanes' power play has been outstanding during their eight-game win streak, converting on 12 of 26 opportunities. The ‘Canes now have the best power play in the NHL at 31.8 per cent. Pair that with a top-10 penalty kill, and you have one of the most well-rounded teams in the NHL to this point of the season.

Speaking of winning streaks, the New York Islanders have won nine straight games and move from fourth to third in our rankings. The Isles had a 4-0-0 week with wins over Buffalo, Boston, and a pair against New Jersey.

Despite losing captain Anders Lee to injury mid-week, and playing without J.G. Pageau and Noah Dobson on Sunday, New York continued its winning ways. The competition gets stiffer for the Isles this week, as they face the Capitals followed by a pair of games against the Flyers.

The Colorado Avalanche remain in sixth spot in our rankings despite sitting 10th in points percentage. Our statistical model considers the Avalanche a top team in the NHL and one to watch in the coming weeks.

Colorado has the best expected goal differential in the NHL despite ranking seventh in actual goal differential. The Avs rank 15th in goals per game and 13th in power play percentage. Defensively, Colorado sits fourth in goals-against average and second in penalty kill percentage. Based on the quality and quantity of Avalanche shots, we expect this team to start scoring more and when they do, coupled with their excellent defensive play, we see this team as one to be feared.

The Minnesota Wild continue to move up our Power Rankings going from 14th to 10th to seventh. The Wild are coming off a 3-0-0 week which included a pair of wins over the division-leading Vegas Golden Knights.

The Wild are quickly becoming must-see TV thanks to rookie sensation Kirill Kaprizov. The 23-year-old Russian forward leads all rookies with 24 points in 26 games. Minnesota has long been a solid 5-on-5 team but was sunk by league-worst goaltending last season. It’s been a different story this season thanks to free-agent acquisition Cam Talbot and rookie Kaapo Kahkonen.

The Toronto Maple Leafs are facing some adversity for the first time this season. The Leafs have lost five of their past six games and drop from third to eighth in our rankings. Toronto is still an excellent team, ranking second in expected goal differential and fourth in goal differential. The recent skid is likely nothing more than a mid-season rut. Toronto will have some time to iron out the kinks as its next game comes Friday against Calgary.

Thanks to a 3-1-0 week, the Edmonton Oilers jump from 18th to ninth in our Power Rankings. Edmonton has one of the best expected goal differentials in the NHL, ranking third behind only Colorado and Toronto. However, the Oilers' actual goal differential sits 11th overall. Consistency will be the name of the game moving forward for the Oilers if they want to remain in our top 10.