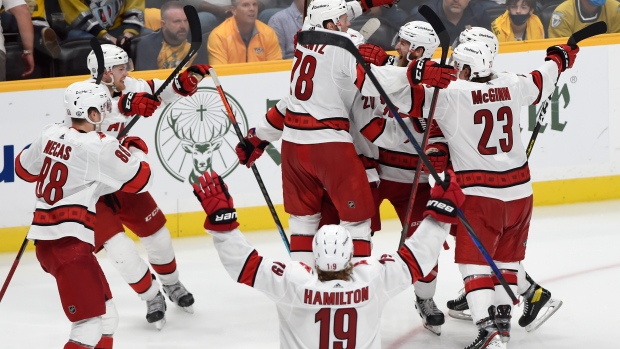 NASHVILLE, Tenn. (AP) — The Carolina Hurricanes finally figured out how to beat the Nashville Predators in overtime: Score quickly.

And now they’re onto the second round.

Sebastian Aho scored his second goal of the game 1:06 into overtime and the Hurricanes advanced with a 4-3 comeback victory over the Nashville Predators on Thursday night in Game 6. It was their second straight overtime win to finish off the series with both winning goals scored within the first couple minutes.

The Hurricanes will play defending champion Tampa Bay, the No. 3 seed in the Central Division. They trailed 3-1 in the second period, the first time in the series that Carolina had trailed by more than a goal.

“It just shows that there’s no quit in this team and we have that confidence that we’re still in the game even though we down a goal in the third,” Aho said.

Carolina won its fourth straight game with a chance to end a series. The Hurricanes are 12-10 in franchise history in clinching games, and they improved to 5-2 on the road in Game 6 with a 3-2 lead.

Aho stunned the largest crowd to see an NHL game this year when he scored so quickly after overtime started for the fourth straight game in this series. Defenseman Jaccob Slavin shot the puck, and Aho tipped it in.

“It was pretty awesome I think just to not have to play too much longer,” Carolina defenseman Dougie Hamilton said. “We were all pretty happy about that. I think (we) just said stick to our game and didn’t say too much. It was great play and good shot, good tip. Very happy.”

Slavin said the key in overtime is just throwing pucks to the net where anything can happen.

Brock McGinn and Hamilton each had a goal and an assist apiece for Carolina. The Hurricanes now have won four straight games with a chance to clinch a series.

Nashville led 3-1 in the second period and 3-2 in the third when the Hurricanes spent much of the period in front of Nashville goalie Juuse Saros.

Hamilton tied it with 6:01 left in regulation after Saros stopped the Canes’ first 13 shots in the period. He scored from the right edge off a pass from Slavin off a faceoff. Carolina coach Rod Brind'Amour said they just had to win a period after having only 14 shots through two periods.

“Then we had momentum,” Brind'Amour said. “Obviously, got the faceoff win, and it ended up in the net. It’s all good.”

Mikael Granlund had a goal and an assist, and Ryan Johansen and Nick Cousins scored for Nashville. Saros finished with 27 saves.

The Predators had 14,107 in the stands after another increase in capacity. CeCe Winans, a 12-time Grammy winner, handled the national anthem, and at least three catfish hit the ice as she finished.

Nashville also scored the first goal for the fifth time in this series with Cousins deflecting Erik Haula’s shot past Alex Nedeljkovic to crank fans up even louder. Carolina tied it at 1-1 with McGinn skating around the net and shooting from the edge of the right circle at 4:20.

Granlund put Nashville back up 1:13 into the second, tapping in Ryan Ellis’ shot from the left edge of the crease. Johansen gave Nashville its first multi-goal lead of this series at 3-1, deflecting Roman Josi’s shot in at 7:32 of the second with the Predators on a 5-on-3.

Aho pulled the Hurricanes to 3-2, deflecting Dougie Hamilton’s shot from the point at 13:34 of the second with 15 seconds left on the man advantage. Hamilton got the puck off an attempted clear by Nashville defenseman Mattias Ekholm.

Then Carolina took control in the third.

“It was probably a little more on us and how we sat back and didn’t have enough poise and continue to make plays and have the pace that we were having in the second period especially,” Johansen said. "That was kind of what we wanted to get back to in overtime, and obviously they scored early on.”

This was just the third series to feature four or more consecutive overtime games and the first since the 2012 conference quarterfinal between Phoenix and Chicago. The other was the 1951 Stanley Cup Final between Toronto and Montreal.

This was just the sixth time Carolina has rallied from a multi-goal deficit to win a playoff game and only the second in a series-clinching game. The last was Game 7 of the first round in 2019.

The Hurricanes defenseman now has two assists in as many games. He has 17 points through 26 career postseason games. He also has 14 assists, most by a defenseman in franchise history, breaking a tie with Dave Babych and Bret Hedican.

Johansen had essentially been benched from the power play unit in Games 3, 4 and 5 playing only a combined 28 seconds in those games. He came out in this game on the first man advantage and played 4:37 on the power play.

He scored his team-high third goal of the series with a couple seconds left in the 5-on-3, helping Nashville improve to 3 of 25 on the power play against Carolina this postseason.