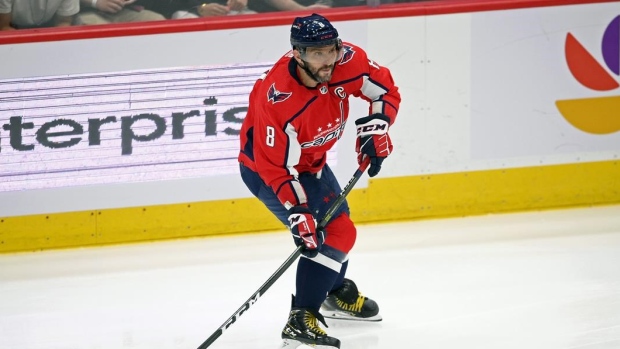 Alex Ovechkin will be allowed to return to full activity with the Capitals on Tuesday after passing his PCR lab test overnight, tweets the Washington Post's Samantha Pell.

Ovechkin was placed in the NHL's COVID protocols last week and was forced to miss the All-Star Weekend festivities.

Alex Ovechkin passed his PCR lab test result overnight and will be allowed to return to full activity today, per the Caps.

All WSH players/staff who had to get additional confirmatory testing for initial positives yesterday returned negative send-out PCR results overnight.

Pell adds that all Caps players and staff who had to get additional confirmatory testing for initial positive tests on Monday returned negative PCR tests overnight.

Matthews took a knee to the head in Toronto's 4-3 overtime victory over the Carolina Hurricanes Monday night and was forced out of the game early.

Head coach Sheldon Keefe told reporters that Matthews would be evaluated on Tuesday. His absence at the team's skate was originally planned after participating in All-Star Weekend.

Masters also notes that Jake Muzzin, out since Jan. 15 because of a concussion, is trending toward a return Thursday against the Calgary Flames.

Forward Christian Dvorak will not be ready to make his return to the lineup Tuesday against the New Jersey Devils.

Dvorak did take part in the team's gameday skate, but was wearing navy along with the other extras.

Cayden Primeau will start in net against the Devils.

Forward Ryan Poehling was in a regular white jersey and skated alongside Joel Armia and Cole Caufield on the fourth line.

Here were the rest of the lines Tuesday morning according to Lu:

Sens head coach D.J. Smith told reporters that Anton Forsberg will start in net on Tuesday night against the Carolina Hurricanes after Matt Murray got the nod in Monday's 4-1 victory over the Devils, stopping 32 of 33 shots.

Smith added there will be no other changes to Ottawa's lineup Tuesday night.

Forward Jonathan Toews was not on the ice for Tuesday's skate, indicating he still may be in concussion protocol, tweets Charlie Roumeliotis of NBC Sports Chicago.

Jonathan Toews is not on the ice for practice. Looks like he’s still in concussion protocol. #Blackhawks

He has been in concussion protocol since Jan. 28 and has four goals and 19 points in 43 games this season.

The Blues have placed defenceman Scott Perunovich on the injured reserve list because of an upper-body injury and recalled forward Dakota Joshua from the AHL's Springfield Thunderbirds, tweets The Athletic's Jeremy Rutherford.

Scott Perunovich has been placed on IR (upper-body) and the Blues have recalled Dakota Joshua from @ThunderbirdsAHL. #stlblues

Forward Derick Brassard is expected to return to the Flyers' lineup Wednesday against the Detroit Red Wings, Philadelphia announced.

Lineup update: Flyers forward Derick Brassard is expected to return to the lineup on Wednesday vs. Detroit. pic.twitter.com/ZuPa0r6pbg

The 34-year-old has been out since Jan. 6 because of a hip injury. He has four goals and seven assists in 19 games so far this season.

The Canucks announced Monday night that they have recalled defencemen Ashton Sautner and Noah Juulsen from the AHL's Abbotsford Canucks.

Transactions: #Canucks recall Ashton Sautner and Noah Juulsen. Guillaume Brisebois has been activated from IR and transferred to Abbotsford.

Meanwhile, the team also said that defenceman Guillaume Brisebois has been activated from the injured reserve list and transferred to Abbotsford.