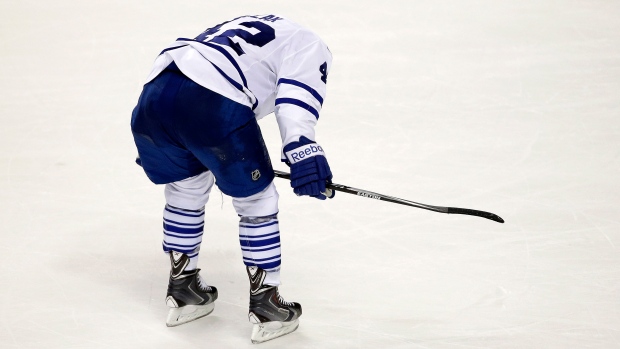 Tyler Bozak had played in 128 consecutive games before he sat Saturday in Pittsburgh with a lower body injury. To the apparent surprise of Mike Babcock, Bozak did not practice Monday, but he is expected to play Wednesday in Buffalo.

Babcock hadn't decided which goaltender would get the next start. James Reimer started Friday and won in Columbus while Jonathan Bernier started slowly in Pittsburgh and lost. Babcock said he'd spoken to Bernier about his wobbly first periods, too; the 27-year-old has allowed five goals in 22 first period shots.

Joe Colborne (thumb) practiced this morning and took a regular turn on the 3rd line. Colborne's surgically repaired wrist has also benefitted from the extra time off as well according to Colborne. Sam Bennett (upper body) practiced as well, both will be at the morning skate on Tuesday and a decision on their status will be made then.

Karri Ramo will start against Washington. Coach Bob Hartley said he's "sick and tired of the musical chairs" in the net. He wants one of the veteran goaltenders to step up. He will remain patient with Ramo and Jonas Hiller before considering Joni Ortio for now.

Flames top line was split up: Michael Frolik is on the right side of Johnny Gaudreau and Sean Monahan. Jiri Hudler was skating with Bennett and Mikael Backlund

Ferland was given a maintenance day