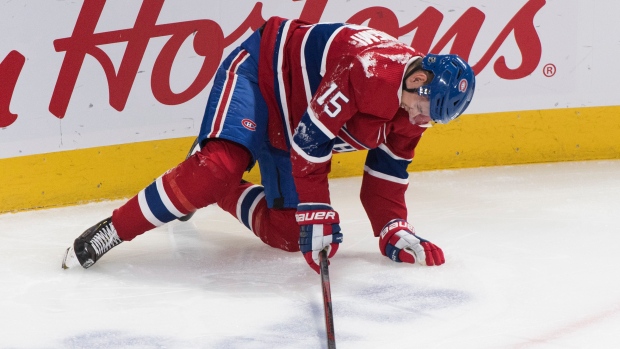 Jesperi Kotkaniemi was placed on Injured Reserve as a result of an upper-body injury he suffered due to a hit by Colorado Avalanche defenceman Nikita Zadorov on Dec. 5.

Meanwhile, Matthew Peca exited Tuesday's game in Pittsburgh with a lower-boy injury and is questionable to play tonight against the Ottawa Senators.

Additionally, the Canadiens recalled forward Ryan Poehling and defenceman Christian Folin from the AHL's Laval Rocket. Poehling has 12 points across 26 games with Laval and Folin is coming off of a seven-game conditioning stint.

Several Jets' regulars were absent from today's skate and are taking a maintenance day. Neal Pionk, Tucker Poolman and Adam Lowry will all make the trip and play against Detroit Thursday night.

Assuming it’s another maintenance day for a number of @NHLJets not skating today.

The line rushes were as follows:

The Canucks have recalled forward Zack MacEwan, 23, from the AHL's Utica Comets as a likely replacement for Michael Ferland, who exited Tuesday night's game against the Toronto Maple Leafs in the second period. MacEwen has played seven games and registered two points with the Canucks this season.

Ferland is not in concussion protocol but is seeing doctors to be medically assessed, according to head coach Travis Green.

Ferland is not in concussion protocol and is seeing the #Canucks doctors today, said Coach Green.

Rasmus Dahlin was back at practice today and is expected to make his return to the lineup against the Nashville Predators on Thursday. He was also placed on the team's top power-play unit.

The league's top two teams will battle tonight in Washington for an Eastern Conference showdown. Braden Holtby is expected to receive the nod in between the pipes while the Boston Bruins counter with Jaroslav Halak.

Halak vs Holtby in net tonight for Capitals-Bruins.

Washington's lineup is expected to look as follows:

The Avs' lineup is continuing to progress to full health with the expected return of Nazem Kadri on Wednesday after a three-game absence. The 29-year-old ranks fifth in scoring on the team with 20 points in 27 games played. Kadri hasn't appeared in a game since Dec. 4 versus the Toronto Maple Leafs, his former team.

Pavel Francouz is expected to start in goal tonight after being the first netminder off of the ice at morning skate.

Pavel Francouz is the first goalie off the ice and will start against the Flyers. #Avs

Filip Zadina has been reassigned to the AHL's Grand Rapids Griffins after playing seven games with the Red Wings. The Czech forward's time with Detroit saw him produce three assists.

In a later set of moves, the Red Wings also assigned defencemen Dennis Cholowski and Dyland McIlrath to the Griffins.

Philadelphia will be without Oskar Lindblom tonight due to an upper-body injury as they take on the Colorado Avalanche in Denver. Lindblom is sixth in Flyers' scoring with 11 goals and seven assists across 30 games played.

Injury update: Oskar Lindblom has an upper-body injury and will not play tonight. #PHIvsCOL

Forward Chris Stewart is expected to make his return to the lineup after being a healthy scratch for the last 10 games.

Lehigh Valley Phantoms forward David Kase has been recalled and will be available to make his NHL debut on Tuesday night against the Avalanche. The Flyers selected the Czech native in the fifth round (128th overall) of the 2015 NHL Draft. He has six points in 21 games played with the Phantoms so far this season.

Roster move: We have recalled forward David Kase from the@LVPhantoms (AHL). Kase will wear #72 and is available for tonight's #PHIvsCOL tilt. https://t.co/99rHeDSub1

Travis Konecny remains out indefinitely with a concussion.

The Panthers have loaned forward Aleksi Saarela to the AHL's Springfield Thunderbirds following a three-game NHL stint. Saarela registered no points and had three shots on goal during his tenure with Florida.

Jayce Hawryluk, 23, has been assigned to the Thunderbirds on a conditioning loan.

Nick Leddy was back at practice today after suffering a lower-body injury in Saturday's game against the Dallas Stars.

Leddy joins the #Isles for practice in Sunrise this afternoon! pic.twitter.com/2sSK6ptx23

Boston is expected to ice a lineup that looks as follows:

The Blue Jackets will be without Emil Bemstrom for approximately six-to-eight weeks after suffering a dislocated rib and broken cartilage in Saturday's game against the Florida Panthers.