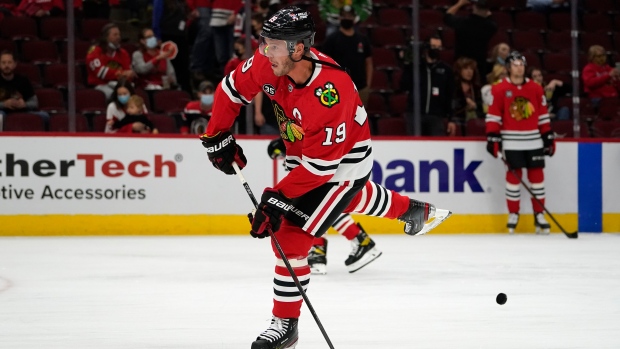 Forward Jonathan Toews will not participate in Chicago's morning skate due to concussion protocol.

Toews recorded an assists Wednesday night in an 8-5 win over the Detroit Red Wings.

Timothy Liljegren is skating today in a regular practice jersey.

Liljegren was shaken up after a collision with Anaheim Ducks forward Trevor Zegras on Wednesday.

Jake Muzzin took to the ice, but was skating in a non-contact jersey.

Carl Dahlstrom has joined the group ahead of the trip @TSN_Edge pic.twitter.com/MLkmDGWfdf

Mathieu Perreault will miss at least three weeks with a lower-body injury, while Christian Dvorak will be out through the all-star break with an upper-body injury,

Meanwhile, Cole Caufield and Joel Armia are travelling back to Montreal today from Wisconsin after coming off NHL's COVID-19 protocol list.

Edmundson — slow progress on lower back injury, out indefinitely.

Dvorak — UBI, not a concussion. Out through all star break.

Armia and Caufield will arrive in Mtl later today.@TSN_Edge

Braden Holtby will start against the Washington Capitals tonight.

The game will be Holby's 500th NHL game.

Braden Holtby will start against the Washington Capitals tonight. Jim Nill presented him with a silver stick and plaque for 500 NHL games, and you’ll note a decent sized bottle of cab. pic.twitter.com/Zo80lQYfFv

The netminder spent 10 seasons in Washington with the Capitals, winning 282 games and helping them to a Stanley Cup in 2018.