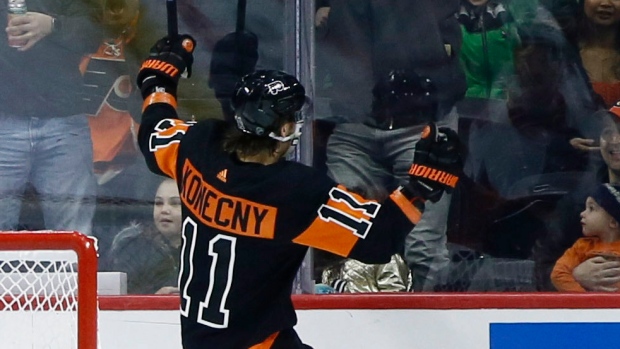 Flyers forward Travis Konecny suffered an upper-body-injury during Saturday's game against the Ottawa Senators. He will be re-evaluated on Monday.

The injury occurred in the first period when Konecny took a hard hit from Senators defenceman Mark Borowiecki.

The 22-year-old currently leads the Flyers in points with 10 goals and 17 assists in 29 games played.

The Montreal Canadiens have assigned forward Charles Hudon to the Laval Rocket of the American Hockey League.

The Canadiens announced that forward Charles Hudon was assigned to the AHL’s Laval Rocket.#GoHabsGo

Hudon has appeared in nine games for the Habs this season, registering one assist.

HOWEVER, Keefe also said "I would expect things to be fluid" when it comes to his line combos. Which is a new, fun element of the Keefe era #Leafs.

The Sabres have announced that forward Kyle Okposo will return to the lineup tonight when the Sabres play the Vancouver Canucks Saturday afternoon.

Kyle Okposo is back in the Sabres’ lineup. Carter Hutton will start against the Canucks while Colin Miller will sit on defense. https://t.co/SEzXb8UQx5

The  31-year-old has scored one goal while adding four assists in 19 games played this season.