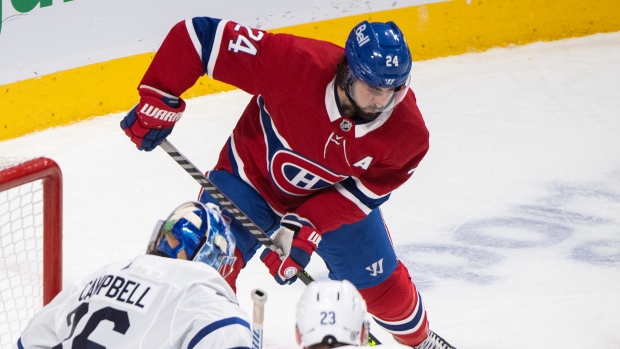 Injured forward Nick Foligno was out on the ice ahead of Toronto's optional morning skate Saturday.

This comes after Foligno also skated on Friday and head coach Sheldon Keefe told reporters he was taking positive steps toward a return.

Nick Foligno (upper-body) is out on the ice ahead of #Leafs optional morning skate today.

With Toronto just one point away from its first division title since the 1999-2000 season, Campbell is the projected started after occupying the home net during the skate.

Campbell has been lights out this season with a 16-2-2 record and a .924 save percentage.

Head coach Dominique Ducharme revealed that forward Philip Danault suffered a concussion on Thursday against the Toronto Maple Leafs. Danault is back in Montreal for further evaluation.

Forward Cole Caufield practiced on the third line with veterans Corey Perry and Eric Staal ahead of tonight's game against the Maple Leafs. Jake Allen will get the start.

The Senators announce they have recalled goaltender Filip Gustavsson from the taxi squad.

Roster update: The #Sens have made the following roster move:

G Filip Gustavsson has been recalled from the team's taxi squad.

He has a goals-against average of 1.87 and a save percentage of .944 in six games with the Sens so far this season.

Alex Ovechkin remains out Saturday against the Philadelphia Flyers with a lower-body injury, tweets Samantha Pell of the Washington Post.

Craig Anderson will get the start in net.

Craig Anderson will be in net tonight for the Capitals vs Flyers.

Forward Patric Hornqvist skated on Florida's fifth practice line Saturday morning according to Panthers team reporter Jameson Olive. He has been out since April 24 because of an upper-body injury.

#FlaPanthers forward lines this AM:

Looks like Verhaeghe and Hornqvist could still be out.

Forward Max McCormick has cleared after being placed on waivers Friday.