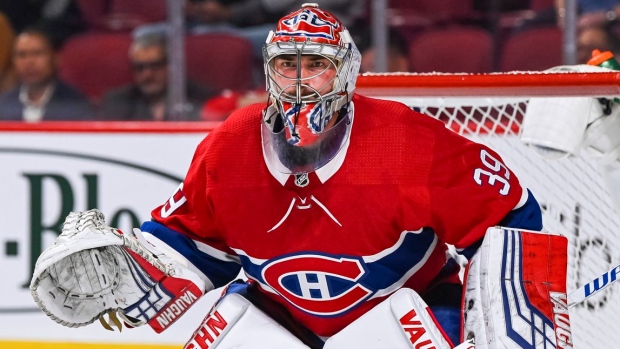 The Montreal Canadiens have recalled goaltender Charlie Lindgren from the AHL’s Laval Rocket and assigned goaltender Cayden Primeau to their AHL team.

Poehling will play tonight because Byron is not ready to return and won’t travel out west. After only one practice following nearly a month out of action, team doctors and coaching staff don’t want Byron to push too hard and possibly suffer a setback.

Julien says Primeau was sent down to Laval to play today and continue his development. Adds that Price will play the majority, if not all of the 4 games in western Canada before Christmas, so Primeau likely wouldn’t see the net.

Julien says Kotkaniemi and Mete will both travel with the team on Sunday and one or both might return to action in western Canada.  - via John Lu, TSN.

The Ottawa Senators have recalled defenceman Andreas Englund from the Belleville Senators of the AHL.

Jacob Markstrom in goal after his 43-save shutout vs Carolina on Thursday.
Brandon Sutter returns after missing 13 games with a groin issue.
Canucks finished Thursday's game with a few new looks up front and will start tonight the same way

Evan Cormier has been recalled from Adirondack (ECHL). He has joined the team for tonight’s game against ARI and been assigned number 50. pic.twitter.com/zESXPJML6l