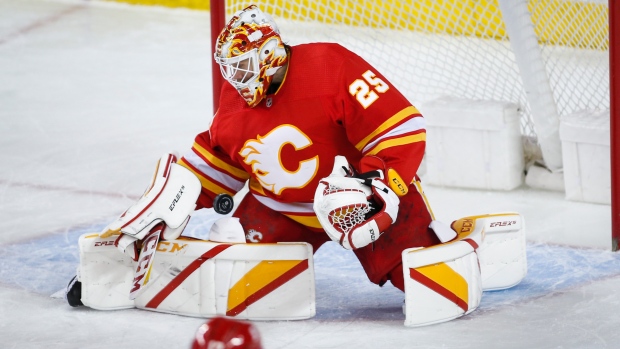 Jacob Markstrom will start for the Calgary Flames Monday night against the Anaheim Ducks.

Markstrom gave up four goals on 32 shots in his first game of the season Saturday night against the Edmonton Oilers.

Brad Richardson and Tyler Pitlick, who have both yet to play this season,  took the ice this morning for Calgary's morning skate.

Muzzin missed practice on Sunday due to maintenance, while Holl missed Saturday's win over the Ottawa Senators with an illness.

Holl left the ice at the same time as the Leafs regular skaters, while Timothy Liljegren, who replaced Holl on Saturday, remained out.

Justin Holl left the ice with the other regulars

Looks like Holl is ready to return to return @TSN_Edge

The Maple Leafs will face the New York Rangers on Monday, with centre Auston Matthews making his season debut.

Captain Blake Wheeler is not at Winnipeg Jets practice on Monday.

The forward has one point in two games this season.

Paul Stastny has moved into the top six in Wheeler’s absence.

#NHLJets are practicing in MN today. The Jets play the Wild on TSN3 tomorrow https://t.co/pHOXBNxsV8

With Wheeler absent from practice, the team has some new-looks on the power play, with Cole Perfetti taking Wheeler's spot.

The Jets will be in action Tuesday night on TSN3 when they play the Minnesota Wild.

John Gibson may be ready to return Monday night against the Calgary Flames, according to TSN's Ryan Rishaug.

Gibson was injured in the team's season-opening win over the Winnipeg Jets after a collision with Andrew Copp.

Sounds like John Gibson may be good to go tonight for the Ducks against Calgary. Took a bump from Andrew Copp in season opener, but wasn't too serious. Young Ducks team 1-1 to start the season.

Per Coach Q, it’ll be Spencer Knight in net tomorrow in Tampa.

He says Olli Juolevi could make his Cats debut tomorrow as well. #FLAvsTBL

Star forward Nikita Kucherov was not on the ice for practice Monday after exiting Saturday's win over the Washington Captials with an injury.

#GoBolts practice has started, and Nikita Kucherov is not on the ice.

The 28-year-old appeared to tweak something after a minor collision with a Capitals player in the third period. Kucherov skated back to the bench slowly in considerable pain before eventually leaving for the dressing room.

Head coach Jon Cooper did not have an update following the game, but said to not hit the “panic button” yet.

Forward Tommy Novak was recalled Monday from the Milwaukee Admirals, while Cody Glass was assigned to the AHL club.

The #Preds have recalled forward Tommy Novak from @mkeadmirals (AHL). Additionally, the team has assigned forward Cody Glass to Milwaukee.https://t.co/LGlDPgddEP

Forward Mike Hardman was recalled from the Rockford IceHogs of the AHL on Monday.

Defenceman Ian Mitchell was loaned back to the IceHog to clear space on the NHL roster.

Forward Mike Hardman has been recalled from the Rockford IceHogs.