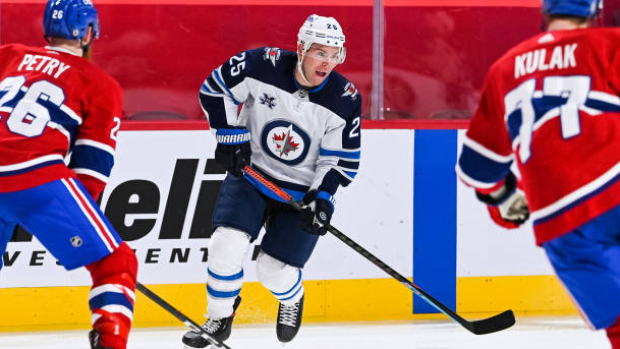 The Jets are getting a pair of forwards back Thursday night.

The 25-year-old Svechnikov last played a week ago and has three goals and seven assists in 31 games so far this season. Stastny last played on Jan. 4 and has eight goals and eight assists in 24 games.

Here were their lines at Thursday's skate according to TSN's Sara Orlesky:

The Capitals have placed forward T.J. Oshie on the injured reserve list, it was announced Thursday.

Oshie left last Saturday's game against the New York Islanders with the injury. He will be eligible to return against the Vegas Golden Knights on Monday.

The Caps needed to make room on the active roster for defenceman Michal Kempny and forward Axel Jonsson-Fjallby, who have both been recalled from the taxi squad. Forward Michael Sgarbossa has been sent to the taxi squad.

Forward Tyler Ennis will be a healthy scratch for the Senators Thursday night as they take on the Penguins in Pittsburgh, reports Bruce Garrioch.

Tyler Ennis will be a healthy scratch #Sens

Ennis has not recorded a point in each of his past five games and has one goal to go along with 12 assists in 29 games so far this season.

Meanwhile, Garrioch tweets that goaltender Matt Murray was skating Thursday morning after missing Tuesday's loss to the Buffalo Sabres with a non-COVID illness. Murray did not practice either on Wednesday.

Head coach D.J. Smith confirmed that Anton Forsberg will get the start against the Penguins.

It was also announced on Thursday that defenceman Dillon Heatherington cleared waivers and will join the Sens' taxi squad.

Defenceman Quinton Byfield has been called up by the Kings and is expected to make his season debut Thursday at home against the Colorado Avalanche, according to the team's website.

Byfield had one assist in six games last season, his first in the NHL since being drafted No. 6 overall in 2020.

The Hurricanes announced they have placed forward Jordan Martinook in COVID protocols.

He has one goal and six assists in 24 games so far this season, his fourth in Carolina.

The Blue Jackets have activated forward Jakub Voracek off the COVID protocols list, it was announced Thursday.

Liam Foudy has also been reassigned to the taxi squad.

Sabres head coach Don Granato announced on Monday that goaltender Malcolm Subban underwent surgery for his lower-body injury and is not expected back this season.

Defenceman Colin Miller also underwent surgery for an undisclosed ailment and is expected to miss at least six weeks.

Click here for more on the latest injury news in Buffalo.