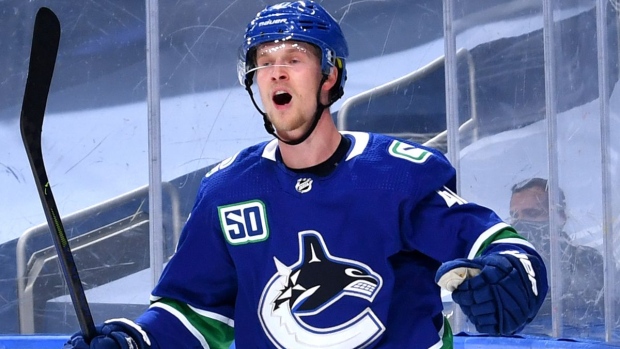 Star forward Elias Pettersson was not on the ice for Vancouver's morning skate on Monday ahead of their game against the Montreal Canadiens.

Pettersson will miss the game on Monday as head coach Travis Green is hopeful he'll be able to return at some point this week.

The 22-year-old has missed the past two games with an upper-body injury and is currently listed as day-to-day.

No Pettersson on the ice for the morning skate. #Canucks @TSNHockey @TSN_Edge

Asked if he expects Pettersson back this week Green says “I hope so”. He won’t play tonight, “hopefully soon” #Canucks @TSNHockey

Kirby Dach did individual work during the team's optional practice.

Head coach Jeremy Colliton said Dach will travel on Chicago's upcoming road trip so he can keep skating and practice, but added he's still has a ways to go.

Colliton said Kirby Dach will travel on the road trip, but he said he's still has a ways to go.

Dach was injured during a pre-tournament game for Canada at the 2021 IIHF World Junior Championship and underwent surgery to repair a right wrist fracture in late December.

Forward Ondrej Käse is skating Monday on his own.

Ondrej Käse is skating on his own. At a decent clip.

Kase hasn't played since Jan. 16 because of an upper-body injury.

Kaapo Kahkonen will start for the Wild against the Vegas Golden Knights.

A few lineup changes for #mnwild in the team's return to Xcel Energy Center to kick off a five-game homestand vs. #VGK.

Soucy back in for Hunt.