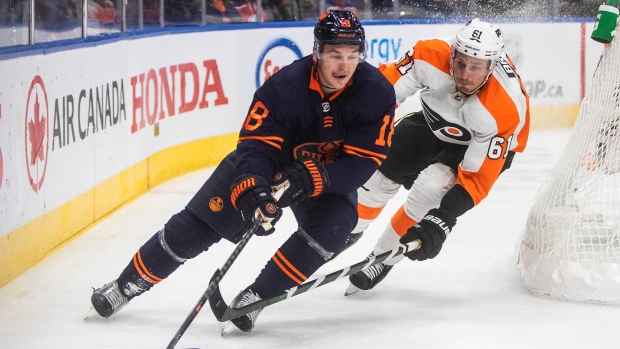 Forward Zach Hyman is returning to the Oilers' lineup Thursday against the Nashville Predators, the team announced.

Hyman missed the last three games while being in COVID protocol and was on the third line at Thursday's skate alongside Ryan McLeod and Zack Kassian.

Meanwhile, Mikko Koskinen will get the start in net Thursday. Here were the Oilers' lines at the gameday skate courtesy of TSN 1290's Jason Gregor:

The Vancouver Canucks have removed goaltenders Thatcher Demko and Jaroslav Halak, and forward Conor Garland from the league's COVID protocol, the team announced on Thursday.

Transactions: The Vancouver Canucks announce today that Thatcher Demko, Jaroslav Halak, and Conor Garland have been removed from COVID protocol. Demko will join the team in Calgary.

Zaitsev skated at practice for the first time since sustaining a heel injury on Dec. 18. He has one goal and one assist in 22 games this season, his third with the Sens.

Brown returned to practice with a full face shield, wearing a no-contact jersey as he continues to recover from a broken jaw suffered in warmups prior to the Senators game against the Calgary Flames on Jan. 13. Brown has five goals and 19 points in 26 games this season, his third with the Senators.

Both players appear to be headed for returns after the all-star break with an outside chance to be available prior to the break.

Nikita Zaitsev skating at practice for the first time since suffering a heel injury on Dec 18th #sens pic.twitter.com/QUBcrq668C

Connor Brown is also at #Sens practice with a full face shield and wearing the non-contact jersey - a freak accident in warmups ft. a puck off the cross bar left him with a broken jaw vs Calgary a few weeks ago. pic.twitter.com/hLvNsRU3sr

Connor Brown and Nikita Zaitsev look like they’ll be back after the All-Star break with “an outside chance” they’re available to the #Sens before hand.

Forward Egor Sokolov has been recalled from @BellevilleSens.

Head coach Dominique Ducharme confirms that Lukas Vejdemo will replace Christian Dvorak (UBI) in the lineup on Thursday against the Anaheim Ducks. Cayden Primeau will be the starting goaltender.

Ducharme confirms that Vejdemo will replace Dvorak in the lineup tonight against the Ducks. Primeau gets the start in goal.

Defenceman Dylan DeMelo skated with a non-contact jersey at Thursday's practice. He was moved to injured reserve earlier in the week due to a lower body injury.

Kovacevic will make his NHL debut tonight against the Vancouver Canucks.

TRANSACTIONS: The #NHLJets have recalled D - Johnathan Kovacevic from the taxi squad and reassigned D - Leon Gawanke from the Manitoba Moose (AHL) to the taxi squad.

Defenceman Ryan Pulock joined the Islanders morning skate on Thursday. He has not played sine takin a puck off of his foot on Nov. 15.

Pulock has joined the #Isles for morning skate! pic.twitter.com/lTDxARSO75

The Avalanche have called up forward Dylan Sikura from the AHL's Colorado Eagles, it was announced Thursday.

We have recalled Sikura from the Colorado Eagles. #GoAvsGo

The 26-year-old has appeared in one game with the Avs so far this season.

The Blackhawks have recalled goaltender Collin Delia from the Rockford IceHogs.

The Blackhawks have recalled goaltender Collin Delia from the @goicehogs @Enterprise | #Blackhawks pic.twitter.com/ujEBIHXi6r

The Sabres re-assigned defenceman Casey Fitzgerald to the taxi squad, the team announced on Thursday.

We have reassigned defenseman Casey Fitzgerald to the Taxi Squad.

Devils defenceman Dougie Hamilton and Ty Smith practiced for a second-consecutive day on Thursday. However, Hamilton remains in a non-contact jersey and remains without a definitive return date.

Both Dougie Hamilton and Ty Smith are on the ice for #NJDevils morning skate, which doesn't mean anything other than they're getting in some skating. I wouldn't read into it any more than that.

Both players were originally waived by their clubs on Wednesday.

Niku, a 25-year-old from Finland, has six assists this season with the Habs, his first in Montreal after joining the team on a one-year deal in September. Niku spent the first four seasons of his career with the Winnipeg Jets, scoring two goals and eight assists over 54 games.

The 29-year-old Connolly has appeared in four games so far this season for the Blackhawks and does not have any goals or assists. Connolly is in his second season with the Blackhawks and has also spent time with the Tampa Bay Lightning, Boston Bruins, Washington Capitals and Florida Panthers.