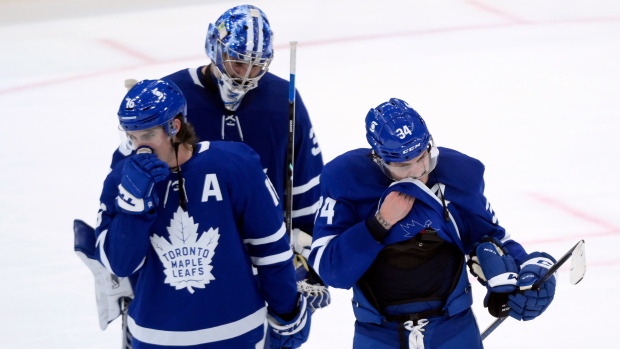 After suffering a 7-1 setback in Pittsburgh on Saturday, the team's most lopsided loss in almost five years, the Leafs are making changes. Auston Matthews and Mitch Marner, who played together all last season, will start tonight's game against the Carolina Hurricanes on separate lines.

"With where we're at as a team, it's time for a different look just to change the chemistry, a little bit, of the group," coach Sheldon Keefe explained.

Marner, who has gone five games without a point, will play with John Tavares and Alex Kerfoot. Matthews, who's been held off the scoresheet in three games since returning from wrist surgery, will skate between Michael Bunting and William Nylander.

"It's coming," Matthews promised. "I've had some good chances, but some tough puck luck. Just try and stay the course, individually and as a team."

What has to change?

"Just moving as a cohesive unit out there. All five guys on the same page," Matthews said. "That's something that has been a little off these last couple games."

Marner is mired in his longest point drought since a seven-game dry spell that stretched into December 2017.

"I've been through stretches like this, so just realize it's going to end," Marner said of his mindset following Saturday's game. "Just stay patient with my game."

Matthews has landed 17 shots on net, but Marner only has four during the team's three-game winless skid (0-2-1).

"We've played well defensively but, obviously, everyone wants us to produce, and we need to produce," Marner said. "We're trying to get those second opportunities a little better. I got to try to be around that net a little more. I got to try and be there for those dirty rebounds and making plays off rebounds."

Keefe is focused on managing the confidence of the group, which seems a bit shaky at the moment.

"We got a number of guys that are still looking to make their mark offensively on the season. It's important that we don't get away from our structure and the foundation we laid," said Keefe. "And when I say, offence, we're talking about goals, because I think we have generated a lot of opportunities to score. In fact, most of our offensive numbers are right at the top of the NHL."

The Leafs are averaging 35 shots per game this season, which ranks sixth in the NHL. Toronto owns the third best CorsiFor percentage (54.9), per NaturalStatTrick.com. And yet the team has scored just 12 times in six games.

Keefe points out that the Leafs had a 21-5 edge in scoring chances during Friday's loss to the San Jose Sharks.

"We've played some good hockey here and it's important we don't over blow what happened the other night," the coach said. "We're aware of it. We know it's unacceptable. We're expecting a response tonight yet, at the same time, I don't think it's indicative of who we are as a team."

"I don't think Toronto's playing poorly," agreed Hurricanes coach Rod Brind’Amour. "I've watched a couple of their games [and] you're not keeping these guys off the scoresheet all year so it's a matter of time. Hopefully, it's not tonight, obviously. We know we're in for a big one tonight."

Matthews stressed that the season is still young.

"We want to be better and we're going to be better, but that noise and that panic from the outside can't shake us," the 24-year-old centre said. "There's really no reason it should because it's early and we're still trying to figure out our game. We haven't played nearly to the ability that we'd like to, or we expect from ourselves. Tonight will be a really good test for us."

How does the team avoid letting the outside noise impact their confidence?

"[Don't] take what you guys say too seriously," Matthews said with a smile. "You guys have a job to do and that's fine, but ... it's not the end of the world right now. We're still trying to figure it out and we're still trying to mesh together. We got a lot of work to do, and we realize that but, at the same time, we're not going to let the outside shake us just because that's the narrative being portrayed right now."

Sunday's day off in Raleigh seemed to help calm the waters.

"Things are much different here than they are in Toronto and it's a lot easier for our guys to just to be amongst themselves," Keefe noted.

There were no formal team events, but there was plenty of chatter between players.

"We have to prove we're going to break some bad habits," said alternate captain Morgan Rielly, who's the longest-serving Leaf. "We have to play better. There's areas of our game that have been alright, but there's plenty of areas we have to clean up and improve on. The intensity has to go up. We have to realize we have to bounce back."

Matthews and Frederik Andersen became close friends during their five seasons together in Toronto. Why did the goalie from Denmark and the goal-scoring phenom from Arizona hit it off so well?

"We got a lot in common," said Matthews. "Both pretty mellow. It was nice to catch up with him yesterday. It's going to be funny, but also a lot of fun, facing him tonight. It's weird seeing him in red colours as opposed to blue. Hopefully, he lets me sneak one or two past him."

On Sunday, Matthews and Andersen watched NFL Red Zone together so that they could keep track of the players on their respective fantasy teams. Then they grabbed a bite to eat.

"It means a lot," Matthews said of the friendship. "Regardless of not playing together anymore, we still talk almost every day. He's an easy guy to hang out with. We'll be friends for life."

So, who has the edge tonight?

"I try not to think about that too much," Andersen said. "Just be in the moment, really, just try to play the game and react to what happens."

"I don't know," Matthews said with a grin. "I'd like to think it's advantage shooter, but he's big [6-foot-4, 238 pounds]. He takes up a lot of room in that net and it's not easy to get goals past him. Obviously, he's gotten off to a really good start and the way they play, they play with a lot of structure, a lot of pace, so we have to make sure we're really focused tonight."

The Hurricanes have started the season with four straight wins with Andersen posting a .944 save percentage.

"He's very calm in there," observed Brind'Amour. "Even when we're kind of running around a bit, he's at ease and makes the saves look easy. It has a calming effect on our group."

David Ayres, the emergency backup goalie who helped the Hurricanes beat the Leafs in Toronto a couple seasons ago, will be in the building tonight.

Keefe was asked what stood out the most about the night Ayres was forced into the game following injuries to James Reimer and Petr Mrazek.

"It's been a very long time, so I don't think about it very often," said Keefe. "What stood out to me was the Carolina Hurricanes. They were the story of that event, how they played. To me, the goaltender was irrelevant, because they didn't give you access to the net and that's what this team's capable of. They have that ability to smother you and make it hard to get to the goaltender and we're expecting more of that tonight."

"It's a great story, obviously, and happy for a guy like that to get some life out of it," said Brind'Amour. "It's not just around here. It might be more [of a story] up there where you guys are [in Toronto] than down here."