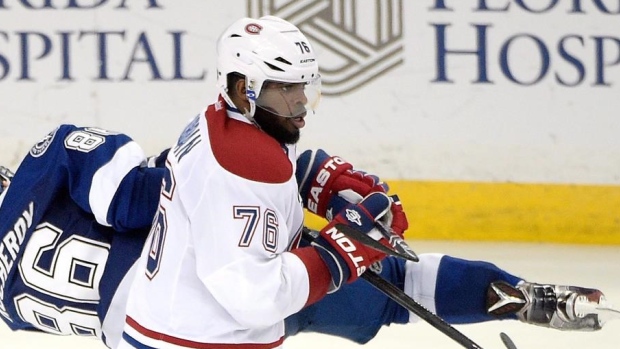 So, how does a general manager just randomly get a Shea Weber-P.K. Subban trade discussion going, I asked David Poile.

The veteran Nashville Predators GM said he figured, what the heck -- given all the trade rumors bandied about in the media on Subban recently, why not just walk over to Montreal Canadiens counterpart Marc Bergevin at the draft and simply ask?

"I had been reading about [Subban] for the last two weeks, so I just asked him at the draft, 'Is there any truth to this?"' Poile said Wednesday night. "And he said, 'Well, I'm fielding calls...' At some point in the conversation, Shea Weber's name got brought up. I think that caused us both to pause a little bit. You knew we had hit on a hot button when his name got mentioned. I think both sides left the draft not sure if we wanted to do this or not. I can't speak for him, but I knew I had to think about it.

"We've had more meetings with our staff the last few days about one player than I can ever remember. That's how important Shea was to our franchise."

And in fact Poile was surprised when apprised of the outrage from Habs fans via social media and the harsh criticism for Bergevin of this trade.

Don't get the Predators GM wrong, he's beyond excited to get Subban and feels mighty good about it, but he also feels this is a very close trade.

"This is the hardest trade I have ever made," Poile said. "It's not like you go about thinking you're going to trade Shea Weber. He's been here for three quarters of the time we've been here as a franchise.

"He grew up here. I call him a foundation piece. He's probably had the most influence and impact on our franchise of any player. He was our captain. It's one thing to trade a player, but somebody that's been with you 12-13 years, you don't stay that long without having an impact on the franchise. This was not a normal trade. From ownership to coaches to all of us in hockey ops, this was not an easy decision. It was a hard one."

But with the way the game is headed, the pace as fast as ever, and Subban being three and a half years younger, the more the Predators' brass debated it, the more they believed this was the right move.

There's also this, a theory I put to Poile: For many years this has been a franchise that has done things right, made the playoffs many years, played the game the right way, draft and develop, etc. But never has it been one of the clubs in the league that fuels water-cooler talk.

The addition of the electric Subban, a presence both on and off the ice, helps change that.

"I agree," said Poile. "Hey, I'm a general manager, but I'm a fan, too. We're in the entertainment business. We've got some exciting players. I love our goalie and how acrobatic he is, I love Roman Josi rushing the puck or Ryan Ellis rushing the puck, I like the swagger of James Neal, the goal-scoring ability of Filip Forsberg, I like the potential of Ryan Johansen, and now you can add in P.K. Subban -- arguably one of the most energetic and most dynamic players in the National Hockey League."

As for the Candiens, this will be Bergevin's legacy trade, for better or for worse, as Habs GM. And make no mistake, the five-year contract extension Bergevin got last year emboldened him to make this kind of gutsy decision.

We had heard Subban's name out there for the past couple of weeks. The talk had died down late last week after the Habs had listened to offers, but didn't like what they were hearing. At that point they really thought they weren't going to trade him. But once Weber's name entered the picture, that changed everything.

"Montreal is getting a huge leadership boost in that dressing room and I think they needed that," is how one Western Conference hockey executive reacted to the deal.

"I'm just happy my team doesn't have to play Weber anymore," said another Western Conference exec in what was a common refrain in the conference.

It suggests that the admiration and respect from some hockey people outweighs the way the analytics community and many media members feel about a deal that they feel is clearly in Nashville's favor.

To me, the Predators win this trade if for no other reason than that Subban is a younger player with more peak years left in him. Simple as that. But I also don't think it's nearly as bad a deal as Bergevin's harshest critics suggest.

I also think we need to wait until Friday's opening of free agency to see what else Bergevin does to have a complete picture of how this team improves itself.

As for the other blockbuster:

If Bergevin thought he was getting it hard from his fans in Montreal, Edmonton Oilers GM Peter Chiarelli might have it worse, given the reaction of fans over his dealing of Taylor Hall to the New Jersey Devils for defenseman Adam Larsson.

Which is why it's interesting when I got this reaction from a Western Conference hockey exec about the Oilers making that move: "Guys want a fixed cost moving forward, I don't blame them."

That fixed cost is Larsson being signed for five more years at a $4.16 million cap hit. That's a great contract as long as Larsson actually lives up to being a top-end blueliner.

I think this is a solid acquisition by Chiarelli. Larsson is underrated. But at the cost of a bona fide scoring star such as Hall? It's an overpay by any definition.

"But if any team can overpay from one of their forwards, it's Edmonton," said another Western Conference exec.

The Oilers would have preferred to trade Ryan Nugent-Hopkins or Jordan Eberle instead for Larsson, but Devils GM Ray Shero had no interest in those players. It was Hall or bust.

Of course, the Oilers talked to the St. Louis Blues about Kevin Shattenkirk, but they knew he wouldn't re-sign in Edmonton after his deal expired in a year. The Subban talks with Montreal never got to a point where it made sense for Edmonton.

"There are almost no defensemen out there for a trade," said an Eastern Conference exec, explaining why the Oilers' deal for Larsson makes sense on some level.

And it's not like the Devils wanted to move Larsson.

"I definitely wasn't looking to trade Adam Larsson," Shero said over the phone Wednesday night. "But I may never get a chance again to get Taylor Hall."

Interestingly, when Shero and Chiarelli took over their respective clubs a year ago, they actually chatted and in some ways planted the seed for this type of deal. They recognized early on that the Devils needed forwards and the Oilers needed defensemen, and that one day they might help each other out.

But they needed time to get to know their teams first.

The reality is that Shero and Chiarelli didn't really get going on this deal until the past week after they both reconnected in Buffalo at the draft.

Shero, after being relayed the heat that his counterpart was taking in the wake of the trade in Edmonton, shed light on Larsson, a player that most Oilers fans obviously haven't watched play much before: "I know one thing, if you look, Adam Larsson and Andy Greene had the toughest quality of competition in the entire league this year. And the worst zone starts. They were matched up against the best players every night. ...

"Adam is a heavy player, he's hard down low. He's an unbelievable pro at his age. He's an easy guy to coach and play with. Maybe people don't know him, but he's a good guy to build a defense around. We're going to have a hole there with him gone for sure."

But to get a talent such as Taylor Hall? Yeah, no question Shero had to pull the trigger.

"I texted [Devils forward] Adam Henrique and I said something like: 'I hope you're still friends with Taylor Hall, by the way,'" said Shero, chuckling. "And he replied back, 'I'm actually on the phone with him."'

And on this day, June 29, 2016, we got two blockbuster trades that we'll remember for a long time.