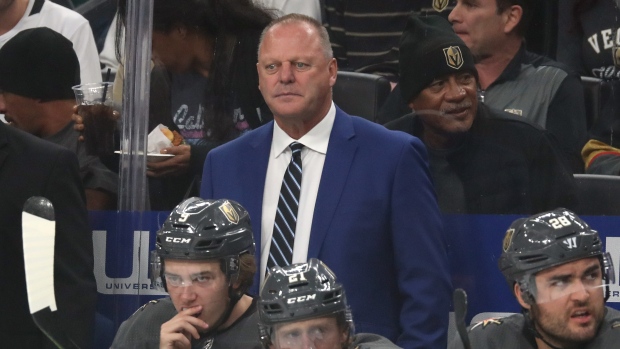 While we wait and wonder what’s going to happen with the NHL season, the business of the game goes on and that includes the New Jersey Devils' coaching search, which is well underway.

Pierre LeBrun: The only team to do so at this point during the season pause, kind of intriguing. Gerard Gallant, according to our sources, interviewed last week by virtual manner, not face-to-face, by Tom Fitzgerald. Now, Tom Fitzgerald himself also has an interim tag, he’s still the interim GM for the Devils, Alain Nasreddine is the interim head coach and he is a legitimate candidate, he’ll be part of this process. Tom Fitzgerald has spoken to a few candidates, not just Gerard Gallant, over the last little while and why not? Use this time during the pause to start looking at next season. Other teams with interim coaches, you’ve got Calgary, Dallas, Minnesota and San Jose, none of those teams have started their coaching search or made any coaching decisions. In the case of the Flames, the Stars and the Wild, pretty obvious, those teams could be in the playoffs potentially, so they’re going to wait until after the season. The Sharks? Bob Boughner is a top candidate to remain head coach, but if and when they decide to interview other candidates, that decision has not been taken.

The first baby step towards getting back to playing would be players actually skating, tough to do when they’re supposed to be in quarantine until April 30th, but there have been some players skating.

Darren Dreger: They’re skating in Sweden, a good bunch of them including Elias Pettersson of the Vancouver Canucks. We should make it clear this is an NHL recommendation, it’s not a directive, it is part of the medical protocol. The local authorities, in this case in Sweden, allow for this type of activity, players are allowed to skate. I can tell you that there are some NHL players in North America who do not like the idea, given the competitive edge that you might see. What happens when these players are welcomed back to North America? No doubt about it, these players will be quarantined and there are some guys who believe that the players will also face mandatory NHL testing.

We remind ourselves and everyone that nothing has been cancelled in the NHL, but in other places a ton has, including international hockey and another casualty is about to officially become reality.

Bob McKenzie: There has been no official word, but there is expected to be in the next number of days, certainly within the week, that the Ivan Hlinka Wayne Gretzky invitational tournament that is scheduled for this August in Edmonton is going to be cancelled. There are just too many logistical hurdles to overcome. So there goes a major tournament for the 2003 birth year that they would normally get to participate in and for the NHL scouts, there goes the first big event on the 2021 Draft scouting calendar. We’re also going to keep an eye on Hockey Canada over the next couple weeks, they usually have Under-17 camps, a big Under-17 camp at the end of August in preparation for November’s Under-17 World Championship and then there is the World Junior Summer Showcase in August that usually goes in prep for the World Junior Championship at Christmas. Nothing official on that, but Hockey Canada is going to drill down on those dates over the next couple of weeks to see what can or can’t be done.