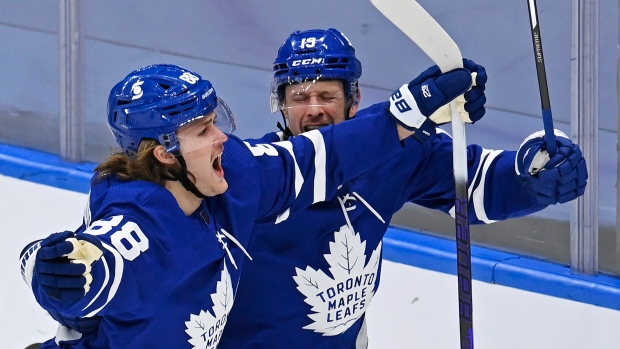 Everyone has heard people say that if only some event in their life had gone differently, everything else would be great. They would be joyous, healthier, more charitable, and, no question, their careers would be flourishing.

Hockey is awesome because that sliding doors moment is palpable. For all three contests this Saturday, the prior game in the series contained an inflection point that hollers for attention. What if Tampa Bay’s Ondrej Palat hadn’t committed that retaliation penalty? What if Toronto’s Jack Campbell had not gone for the poke-check against Paul Byron? And what if Minnesota had taken a 3-0 lead instead of seeing its third marker called off due to an offside? Bets are won and lost on these decisions, which adds an extra spice to the postseason.

Tampa Bay Lightning players enjoy a certain style of play. Boxing out takes precedence over blocking shots. You can take penalties and not be held accountable. This way of life has a benefactor, and his name is Andrei Vasilevskiy. On Thursday night, the money dried up as Vasilevskiy submitted a -2.57 Goals Saved Above Expected (GSAx). Vasilevskiy normally provides a hermetically sealed environment to his teammates, but in Game 3, the Panthers shook the snow globe.

While they enjoy a 2-1 lead, there is trouble stirring for the Lightning beyond Vasilevskiy’s Game 3 flop. For 38:11 of ice time at 5-on-5 during this series, Tampa Bay has been outplayed when the score is within one goal. Notably so. The Lightning have been bested in high-danger chances and expected goals by a wide margin.

The biggest storyline is the diminished play of Tampa Bay’s “shutdown” pair, Erik Cernak and Ryan McDonagh. To be frank, their numbers are ghastly. How bad? During last season’s playoffs, this defensive duo posted soaring percentages in expected goals and high-danger chances: 62.55 and 65.96, respectively.

Those metrics have free-fallen to 39.06 and 28.57. Home and away, Cernak and McDonagh have been pitted against the Aleksander Barkov line, and they have been torched. The sample size is large enough to demonstrate that the Panthers’ top line is tormenting those two with its speed and rapid puck movement.

The extensive repertoires of each team have showcased various avenues for success. Transition attacks led to cowering defencemen in much of Game 1. More recently, the focus has shifted to counterattacks and playing below the circles, with each squad eager to prey on its opponent’s vulnerable defencemen and insufficient forward support.

Vasilevskiy was an elite goaltender in the NHL this season in GSAx, and he was outstanding in last season’s playoffs. The Point line has been contained at 5-on-5 and is primed for a dominant performance. Factor in an injured Barkov and a Lightning team at home, and I will grab Tampa Bay at -139.

The genie was hidden for a while, but all three of the Canadiens’ wishes were granted Thursday night. They were able to counterattack off the Maple Leafs’ turnovers. They successfully stood up at the blue line, forcing the Maple Leafs to chip the puck deep, thereby stymying Toronto’s ferocious rush game. And Carey Price played magnificently in net, finishing the game with a sparkling 1.9 GSAx.

For Toronto, the gruesome injury to John Tavares adds an extra, scary urgency to Game 2. With the Leafs stripped of their No. 2 centre, what happens to William Nylander, Toronto’s only goal scorer from Thursday? When Nylander played with Tavares during the regular season, he posted a high-danger chances per 60 minutes of 13.1. Without Tavares, that number plummeted to 9.59.

Nylander’s tally came during a makeshift line after Tavares left the game, but who he plays with, and their efficacy together, will be paramount to the Leafs winning Game 2. Understandably, Coach Sheldon Keefe seems resistant to split up the Auston Matthews line and it is hard to blame him.

In Game 1, the Matthews line outshot Montreal 13-3 at 5-on-5 and tripled them in shot attempts. Furthermore, the stars got looks on the power plays, contributing to their all-situations stats: Matthews finished the game with 13 shot attempts and Zach Hyman had five high-danger chances.

Losing Brendan Gallagher in early April, coupled with a gruelling schedule down the stretch, may have tainted the metrics for the Canadiens, as they were emitting whiffs of first-round roadkill. But a well-rested Montreal team should be disturbed that in nearly 41 minutes of 5-on-5 play, their opponent generated 39 shot attempts and 27 shots, which far outpaces the Maple Leafs’ numbers per 60 minutes from the regular season.

In Game 2, if Toronto demonstrates better puck management and manufactures more shot attempts on net while flooding the slot with traffic to obscure Price’s vision, they will likely coast to victory. Losing two straight at home to Montreal borders on an unforgivable sin. I don’t see it happening.

After a total of five goals were scored in the first two games, Game 3 hurtled over the total-goals mark of 5.5 as Vegas notched a 5-2 victory. The irony is that it was the least offensive game in the series thus far.

The first two games each had 18 high-danger chances while Game 3 had 14. There was a total of 36 shots at 5-on-5 in Game 3, a number so small that Vegas nearly eclipsed it by itself in Game 1. What pushed Game 3 from an Under to an Over was two Golden Knights goals in the waning minutes against a desperate Wild team. But there are a few reasons to believe the score Saturday will be low enough for the under even with a last-minute tally.

Vegas shredded teams in the West Division this season with its speed in space, utilizing the stretch pass to get out in transition and exploiting opponents’ weak side off the cycle and rush. The Golden Knights have multiple players on their back end who are threats to score, and coach Peter DeBoer empowers them to attack when they deem fit.

But the Wild so far have nearly nullified all this mojo in Vegas’s game. Minnesota has done an excellent job taking away the middle and is receiving back pressure from its forwards to help its defencemen tighten gaps.

In Game 3, Vegas’s goals came off Minnesota miscues, like an icing that left a tired Wild forward group on the ice against the Mark Stone line, or a failure to guard against a bank shot off the back boards (a Vegas staple that I imagine was in the scouting report). The Golden Knights exhausted the Wild skaters in the second period, but this hardly presages a high-scoring outcome going forward.

Another damper on scoring is because Vegas has largely tamed Wild forward Kirill Kaprizov, who has seen his expected goals and high-danger chances drop; through three games, he has one assist and six shots.

Finally, goaltenders Cam Talbot and Marc-Andre Fleury are both submitting strong GSAx’s, signalling that a burst in scoring is unlikely to come from their shortcomings. Three of the four games on Saturday have 5.5 as their goal total, but this one has all the indicators of going under. At -115, it is a worthy bet.