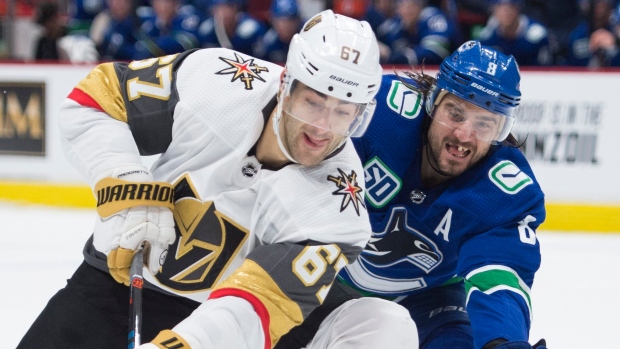 As we near the halfway point of the NHL regular season, it appears that the league’s most intriguing divisional race will happen in the Pacific.

Boston, for example, enters play Monday with a nine-point lead (10 over Florida, who has two games in hand) despite a 2-4-4 stretch in their past 10 games. In the Metropolitan, Washington has already amassed a whopping 57 points in 37 games (126 points per 82 games!), giving them an eight-point advantage over the chasing New York Islanders. The Central Division is much more competitive, with the defending Stanley Cup champions in St. Louis up five points on Colorado and eight on Winnipeg.

And then there’s the Pacific.

It didn’t take long for us to have to reassess what’s going on out West. A division that was supposed to be commanded by the likes of Vegas, Calgary and San Jose had significant early season turnover. Calgary isn’t playing bad, but they are tracking to be 17 points worse than last year’s division-winning season. San Jose is playing poorly, currently pacing for a 28-point loss year-over-year in the standings.

Those teams’ struggles have turned to opportunity for others. Early in the season, it looked as though it would be Edmonton and Vancouver pushing into those spots, but both teams have started to regress towards the middle of the pack as the season has progressed. The one team that has managed to sustain performance – season-to-date – plays down in Arizona.

If we look at the divisional race in five-game segments, you can see how things have shifted over time:

The hidden storyline here is that there is a high chance that the Battle of Alberta becomes meaningful for the first time in ages (save the 2016-17 season). At minimum, it is likely that both teams are fighting for just one divisional playoff berth out of the Pacific. That would push the other into a wild-card race, where they will have to fend off at least one of the quality Central teams (take your pick between Dallas and Nashville), as well as chasing Vancouver.

If we look at 5-on-5 performance measures over the past 25 games, you can see that the changes in the divisional race have been closely linked to how the teams are playing at 5-on-5. Consider the underlying performance numbers over that stretch:

We talked about Edmonton’s standings slip last week – this is still a team driven by explosive play from one line and heavily reliant on goaltending in all other situations. When the goaltending collapsed, Edmonton being routinely outshot and outchanced made them look a less effective team. It’s largely been a Mike Smith problem, but it is exceptionally hard to beat bad goaltending.

That’s a good segue to the Sharks – a team with indisputably the worst goaltending situation in the league. Martin Jones and Aaron Dell have struggled mightily for a couple of years now, and it took the Sharks dominating even-strength play last season to be able to escape what ended up being a dreadful 87.8 all-situations save percentage.

The goaltending is just as bad this season, but the Sharks skater group has been far less effective. Only one skater – one – in Logan Couture has a positive 5-on-5 goal differential (+1). At this point, the Sharks are what they are, and that’s a team that’s going to be watching the playoffs from home.

One other trend that I think is noteworthy, even if it doesn’t directly impact the playoff race: the Los Angeles Kings, much like the Ottawa Senators in the Eastern Conference, were a laughingstock last season. This year there are obvious signs of improvement.

The team is on the right side of the shot battle on most nights and would probably be in the middle of the playoff fight if their goaltending wasn’t similarly grim. This is a competitive 5-on-5 team, but special teams have been a train wreck – the Kings are unsurprisingly 30th in the league on the power play (12.7 per cent), and neither Jonathan Quick nor Jack Campbell have been able to alleviate any penalty-kill pressure (74.6 per cent, 28th in the NHL). But this team is at least scrappy – perhaps scrappy enough to win a few divisional games and upset the top half of the standings.

At the end of the day, it does look like all of these teams are punching up at Vegas. The Golden Knights haven’t had a ton of puck luck – they’re shooting just over 7 per cent at 5-on-5 and stopping a middling 91.6 per cent of shots the other way – but this is still a possession-dominant team with some of the deepest forward lines in the league. No team generates more dangerous offence (2.7 expected goals per 60 minutes), and because of it, the Knights have increased their points pace from 86 to 97 in just the past 20 games.

Arizona does look like one of the biggest competitors they will have: the Coyotes are flush with scoring talent now, on top of Vezina-calibre goaltending. But the Coyotes have slipped a bit in recent weeks too, paving the way for Vegas to reestablish itself in the division.

The Golden Knights don’t have any daylight in the standings quite yet, but a betting man might give them slightly better odds to do so than the rest of the pack.