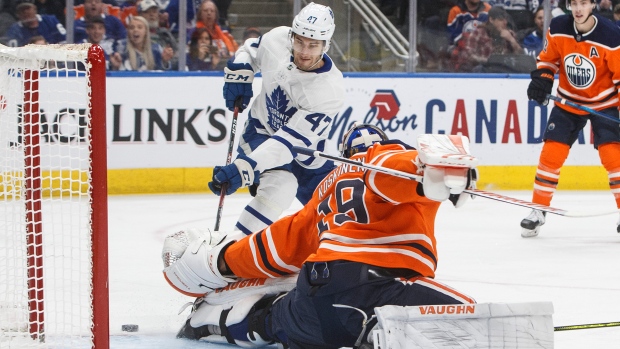 The Edmonton Oilers knew three things had to break favourably this season for the team to return to the playoffs.

One, the Connor McDavid and Leon Draisaitl tandem would need to stay a supernova for most of the season, combatting the team’s depth issues with superstar production at the top of the lineup. Two, the top half of the division needed to show some cracks. Three, the goaltending duo of Mikko Koskinen and Mike Smith would need to exceed expectations.

On the first front, the Oilers have had real success. McDavid and Draisaitl are seeing an insane amount of ice time, and though I think most people have serious reservations about whether that sort of usage rate is sustainable long term, there’s no doubt the production has been there. McDavid (20 goals and 37 assists) and Draisaitl (20 goals and 36 assists) currently lead the league in scoring, and by a considerable margin. Moreover, they are pulling the rest of the Edmonton lineup at even strength. In the 500 minutes they have played together at even strength, the McDavid/Draisaitl grouping is +2 in goals. The rest of the team in those minutes is a -18.

The division has shown some weakening at the top, too. Though Arizona is definitively better year-over-year, last year’s playoff trio of Calgary, San Jose and Vegas has been relatively unremarkable. Excluding Edmonton, the division is on pace to be about 17 points worse year-over-year, and a lot of that has to do with Calgary’s regression and San Jose’s never-ending goaltending nightmare: 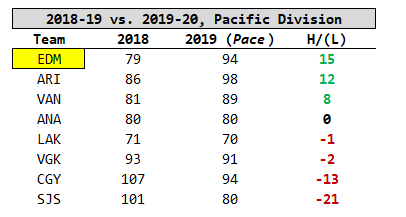 The third question – and perhaps the most important question – still hangs over the Edmonton organization. Statistically speaking, there were plenty of reasons to have reservations about whether or not the Koskinen and Smith duo would work over a full season. Smith’s numbers have been on the decline for some time. Koskinen was largely an unknown. The team needed Koskinen to be as good as or better than last year, and needed Smith to have a big rebound season.

Very early in the season, it looked like things in the crease were breaking favourably for Edmonton. Through October, the Oilers had 19 points in 14 games (111 per 82 games) and were getting solid goaltending in the process. Koskinen and Smith collectively posted a 92.0 save percentage (16th) at 5-on-5, and 91.3 (11th) across all situations. That, combined with an indomitable first line, could push a team into the playoffs. It’s more or less the same strategy this team used during the 2016-17 season.

But since that hot start, the goaltending has faded. Consider team save percentage on a 10 game rolling average, and further consider where league average is in 2019-20: goaltenders at evens stop about 91.8 per cent of shots at even strength and 91.0 per cent in all situations: 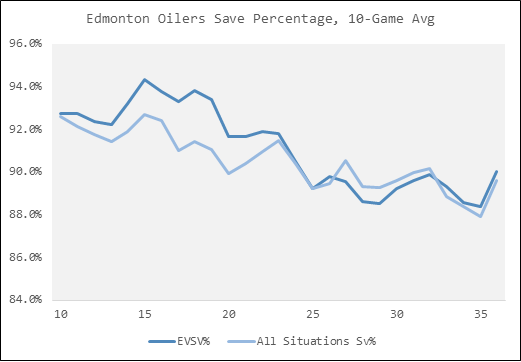 The trend of the graph is skewed a bit because of how hot Edmonton goaltending was to start the year, but the important part here is that over the last 20 games the Koskinen/Smith tandem has been below league average at both levels. In recent weeks it has veered into a more grim territory. Year to date, the Oilers save percentage at the team level now sits 27th at even strength and 21st – thanks in large part to stellar penalty-kill work – across all situations.

Save percentages are partially driven by goaltending performance and partially driven by team effects. Recent efforts in the analytics community have worked to create adjustments for important contextual factors, specifically the quality of the shots each goaltender faces. No one mistakes Edmonton for a better defensive team than, say, Minnesota. To that end, it wouldn’t be wholly fair to compare the likes of Koskinen/Smith to Devan Dubnyk without considering defensive impact.

If we use a measure like Goals Saved Above Expectations, we can compare how many goals a goaltender has added – or subtracted – based on his stop rates and the likelihood of the shots he’s faced finding the back of the net. Season to date, the clubhouse leaders are Arizona’s Darcy Kuemper, Dallas’ Ben Bishop, and Winnipeg’s Connor Hellebuyck. Where do Koskinen and Smith sit? 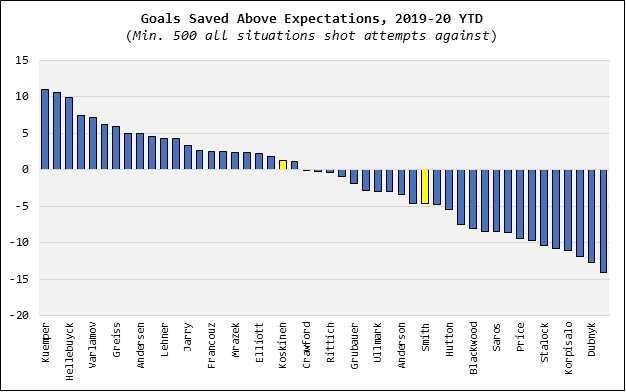 When adjusting for shot quality, Koskinen has given the Oilers about one goal in the standings, and Smith’s taken four away. In the grand scheme of things that would seem more or less in the middle of the pack, but remember that the earlier parts of the season were fantastically positive, and that the Oilers have been great on the kill. At even strength, the story is darker – the Oilers duo is 10 goals in the red.

It will be interesting to see where Edmonton goes from here. The goaltending is a real issue, but most of their problems can be apportioned to Smith. Should the Oilers start riding Koskinen – still an unknown, but certainly respectable enough to pick up more starts – going forward, or continue rolling with the tandem they have tried for the first two months of the season?

I suspect Dave Tippett would prefer to balance those minutes. But Tippett – in the middle of a playoff race and surely aware of the goaltending splits year-to-date – may have little choice but to put the veteran Smith on the back burner for the time being.