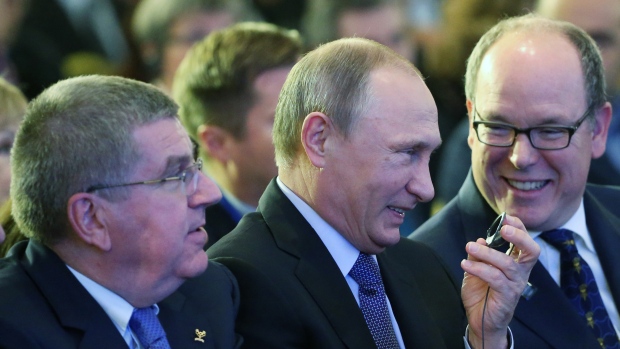 LONDON - The IOC suspended Lamine Diack as an honorary member Tuesday and said it was ready to strip medals from any Russian athletes found guilty of doping and consider retesting samples from the Sochi Olympics.

The International Olympic Committee convened an urgent meeting of its executive board by video conference to consider what action to take in response to the corruption and doping crisis engulfing track and field.

The board agreed on the provisional suspension of Diack, the former IAAF president who was placed under investigation by French authorities last week on charges of corruption and money-laundering related to the coverup of Russian doping cases.

Diack served as a full IOC member for 15 years until 2014, when he reached the mandatory retirement age of 80 and became an honorary member. The Senegalese official stepped down in August as president of the IAAF after 16 years in charge of track's governing body.

The IOC also acted on the damning report released Monday by a World Anti-Doping Agency panel that alleged a widespread, state-sponsored doping program in Russia, implicating the government and intelligence services as well as athletes, coaches and team officials.

The WADA commission, headed by IOC member Dick Pound, recommended that Russia's track and field federation be suspended until it cleans up its act on doping. The IAAF is scheduled to decide Friday whether to suspend Russia, a move which could keep Russian athletes out of next year's Olympics in Rio de Janeiro.

"The IOC expects the IAAF and WADA to consider all necessary action to be taken to protect the clean athletes and rebuild trust," the Olympic body said in a statement Tuesday.

Pound's report said the 2012 London Olympics were "sabotaged" by Russian athletes who should have been banned from competing in the games because of previous suspicious test results.

"The IOC has asked the IAAF to initiate disciplinary procedures against all athletes, coaches and officials who have participated in the Olympic Games and are accused of doping in the report of the Independent Commission," the statement said.

Following the conclusion of the IAAF investigation, the IOC "will take all the necessary measures and sanctions with regard to the withdrawal and reallocation of medals and as the case may be exclusion of coaches and officials from future Olympic Games."

If those medals are taken away, South Africa's Caster Semenya stands to be bumped up from silver to gold. Kenya's Pamela Jelimo, who finished fourth, could move up to silver, while Alysia Johnson Montano of the United States could go from fifth to bronze.

The IOC said it had no reason to question the drug-testing results from the 2014 Winter Games in Sochi, despite the allegation in Pound's report that the lab was infiltrated by agents of Russia's FSB intelligence service.

The IOC said a post-games report by WADA observers "makes no mention of any such irregularity."

"Nor was any such irregularity reported by the international experts involved, nor found by the IOC itself," it said. "Therefore, the IOC has no reason to question the credibility of the results of the anti-doping tests carried out" in Sochi.

However, the IOC — which stores Olympic doping samples for 10 years — said it will retest samples "should substantial doubts arise."

"In any case, the IOC may retest samples once new scientific techniques become available," it said.

The IOC has previously stripped medals retroactively based on retesting of samples, including some gold medallists .