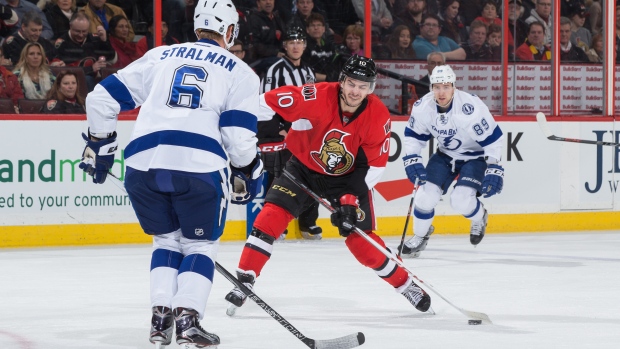 One of the discussion points I’ve found interesting over the years is whether it’s better for short-handed teams to set up in the defensive zone for the purpose of blocking shots versus setting up false shooting lanes that allow goaltenders clean looks at shots from a distance.

Going through some video during this past regular season, it was interesting to see the strategic disparities from team to team. The Boston Bruins, for example, were maniacal about blocking shots. They used goalie Tuukka Rask in something of a secondary role, essentially deciding that if they couldn’t block the shot, he’d have to bail them out.

The Vancouver Canucks were the polar opposite. Vancouver, to my eye, seemed to let an awful lot of shot volume arrive at the doorstep of goaltending duo Ryan Miller and Jakob Markstrom.

The shot data we have on both of these teams suggests something of a systemic difference. Going through the last six years of team performance on the penalty kill, no team blocked a higher percentage of shot attempts than the Bruins last season (36 per cent). Only four teams blocked a smaller percentage of shot attempts than the Canucks did last season (22 per cent). To my surprise, one of those four teams was the 2011-12 edition of the Canucks – a team that earned the Presidents’ Trophy.

I’ve looked at the relationship between shot-blocking (in efficiencies and in magnitude) and goal prevention at both 5-on-5 and the penalty kill before, and the findings have been relatively marginal. I still couldn’t help notice that last year’s Boston team was quite strong at preventing penalty-kill goals, giving up just 5.3 per-60 minutes. Vancouver, on the other end of the spectrum, conceded an above average number of goals against when short-handed.

It’s the same for the majority of teams that have historically sat in the same statistical position as Vancouver. At quick glance, eight of the 10 lowest shot-blocking teams conceded goals at an above-average rate, the worst being the 2012-13 Carolina Hurricanes team that blocked just 21 per cent of the shots and gave up a whopping 8.25 goals against per-60 on the penalty kill.

Knowing that the straight or linear relationship between goal prevention and shot-blocking efficiency has proven small in the past, I wondered if there was something along the lines of a minimum acceptable threshold for shot-blocking in today’s NHL. The theory is something along these lines: “Teams have to block at least X per cent of the shots they face to take the pressure off of their goaltender. Beyond that, it’s pretty much a mixed bag, and goal prevention will still predominantly be driven by goaltending talent and, at a much smaller scale, other skater talents.”

What do we see? 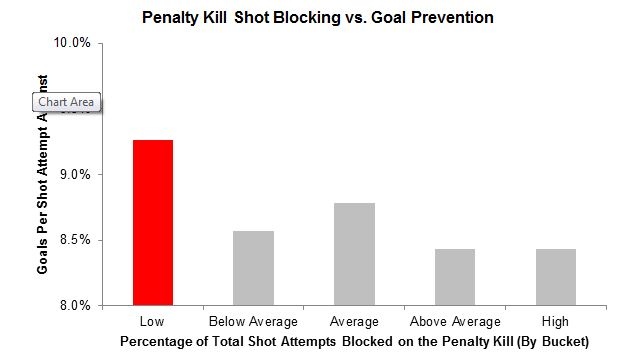 I’m not sure if this proves my theory, but it’s striking to me that teams who historically block very low percentages of shot attempts on the penalty kill more frequently concede goals on a per-shot attempt basis. The rest of the data set is a mixed bag, and discerning between teams that block 27 per cent or 33 per cent of total shot attempts seems like a fruitless endeavour.

I do think this may be why you don’t see the true statistically significant relationship in the data sets when looking on a team-by-team basis. For the majority of the league, penalty-killing performance is going to be affixed to the goaltending and skater talents that historically drive success there.

Alternatively, I think a problem is created when teams don’t meet this minimum threshold, wherever it may be. Three of the worst penalty-killing teams we have seen in the modern era – including the 2011-12 Blue Jackets, 2012-13 Hurricanes, and 2013-14 Panthers – were also three of the least efficient or dedicated shot-blocking teams.

In conclusion: I’m not sure there’s a smoking gun here, but there is enough data to warrant further investigation. While I don’t think this answers the optimization question between shot-blocking versus allowable/unrestricted shooting lanes, I do think the baseline might start with shot-blocking as the priority. Beyond that, to be determined!