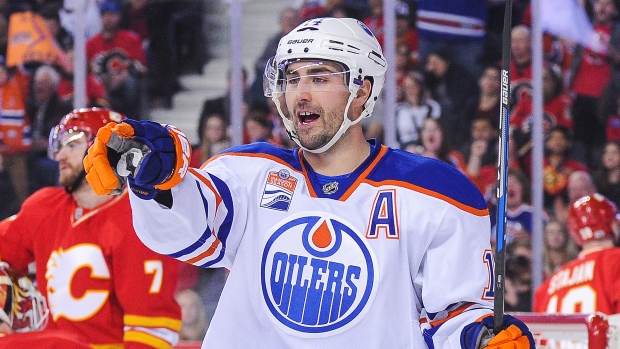 The Edmonton Oilers traded winger Jordan Eberle to the New York Islanders on Thursday in exchange for forward Ryan Strome.

The #Oilers have acquired forward Ryan Strome from the @NYIslanders in exchange for forward Jordan Eberle.

He owns 45 goals and 126 points in 258 career games with Islanders. Strome was selected fifth overall in the 2011 NHL Draft.

Strome owns a $2.5 million cap hit and is entering the final season of a two-year deal.

With Leon Draisaitl becoming a restricted free agent on July 1 and Connor McDavid eligible to sign an extension, the Oilers were believed to be looking to add cap space this summer. They saved $3.5 million in this deal.

"We're excited to add a proven offensive weapon like Jordan to our lineup," Islanders general manager Garth Snow said. "He brings speed and a knack for scoring not only consistently, but scoring big goals, in big games. Jordan brings leadership and experience into our room, qualities that will continue to help us build towards our goals of being a consistent playoff contender and winning the Stanley Cup."

Eberle, a Regina, SK native, has played his entire career with the Oilers, originally drafted in the first round 22nd overall in 2008 and has scored 165 goals and 217 assists in seven NHL seasons.

He played on a line with Islanders captain John Tavares at the 2009 world juniors and Tavares assisted on Eberle's game-tying goal in the dying second of the gold-medal game.

With Jordan Eberle joining John Tavares with the New York Islanders, re-live the memorable World Junior goal they connected on at the 2009 WJHC.