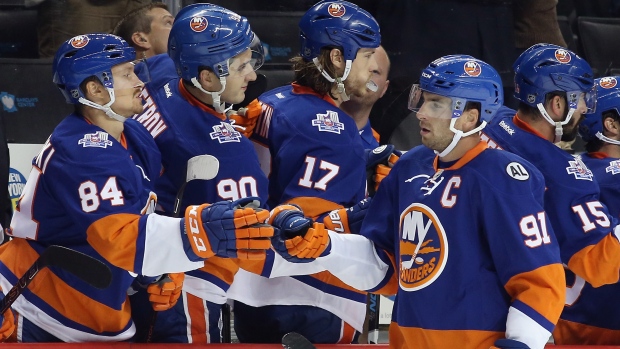 John Tavares and Anders Lee each had a goal and an assist to help a New York Islanders split squad win its first preseason game in Brooklyn, 3-2 over a Philadelphia Flyers split squad Monday night.

Kirill Petrov also scored for New York, which will be playing its inaugural season at the Barclay's Center after 43 years on Long Island. Jaroslav Halak made 12 saves in two periods before giving way to Stephon Williams, who stopped 10 of 11 shots he faced in the third.

In New York, Chris Kreider and Viktor Stalberg scored 35 seconds apart late in the second period to lead the New York Rangers to a 6-3 win over the New Jersey Devils.

Jayson Megna scored twice, and Brian Gibbons and Oscar Lindberg each added a goal for New York in its preseason opener. Anntti Raanta made 11 saves in 32:29, while Magnus Hellberg turned away 12 shots in 27:25.

Jordin Tootoo, Mike Sislo and Adam Larsson scored on the power play for New Jersey, which is 0-2 in the preseason. Cory Schneider allowed two goals on 12 shots. His replacement, Yann Danis gave up four goals in 26:17.

In Washington, Braden Holtby stopped 14 shots and Dan Ellis had 12 saves to lead the Washington Capitals to a 2-0 win over Carolina Hurricanes.

In Toronto, P.A Parenteau scored twice and Nick Spaling had a goal to help a Maple Leafs split squad give Mike Babcock a win in his preseason debut as coach, beating an Ottawa Senators split squad 4-1.

In Ottawa, Joffrey Lupul scored twice including the game-winner 55 seconds into overtime as Toronto's other split-squad won 4-3.

In St. Paul, Minnesota, No. 2 overall pick Jack Eichel's short-handed goal 5:44 into the third period gave the Buffalo Sabres a 3-2 win over the Minnesota Wild.

Nicolas Deslauriers and Matt Moulson also scored for the Sabres. Eichel assisted on Moulson's tying goal 1:36 into the third. Chad Johnson made 15 saves in 40 minutes for Buffalo, while Nathan Lieuwen stopped all three shots he faced in the third.

In Columbus, Ohio, Jeff Zatkovv and Tristan Jarry combined for 30 saves in regulation and overtime as the Pittsburgh Penguins beat Blue Jackets 1-0 in a shootout.

Beau Bennett scored the only goal of the tiebreaker round.

Joonas Korpisalo made 39 saves for the Blue Jackets.

In Edmonton, Aberta, No. 1 overall pick Connor McDavid had two assists as an Oilers split-squad defeated a Calgary Flames split-squad 4-2.

At Bakersfield, California, Nick Shore and Tyler Toffoli scored two goals apiece to lead the Los Angeles Kings to a 5-1 win over the Arizona Coyotes.

CRACKNELL SCORES IN OT TO LIFT CANUCKS OVER SHARKS

At North Saanich, B.C., Adam Cracknell scored 1:39 into 3-on-3 overtime as the Vancouver Canucks beat the San Jose Sharks 1-0.

It was something of a homecoming for Cracknell, who'd played his minor hockey in Victoria.

The 30-year-old Cracknell signed a one-year, two-way contract with the Canucks after splitting last season between the Columbus Blue Jackets and the American Hockey League.

The two teams will meet again on Tuesday at Rogers Arena in downtown Vancouver.