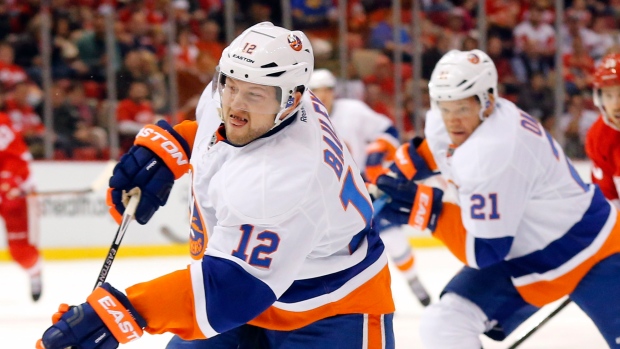 The New York Islanders will take it — along with yet another victory at Detroit.

Lee knocked the puck over the goal line for a split-second in the second period, and the Islanders went on to a 2-1 victory over the Red Wings on Friday night. Detroit has now lost its last five home games against the Islanders — the Red Wings haven't beaten New York at Joe Louis Arena since 2003.

Lee was credited with the tiebreaking goal after a replay review. Brock Nelson took the puck from Detroit's Riley Sheahan and nearly slipped it past goalie Petr Mrazek, but it sat next to the right post before Lee arrived and hacked at it. At first, it wasn't clear if the puck went in, but a replay showed it barely crossing the line before Detroit defenceman Jonathan Ericsson cleared it out.

"Brock made a great play, stripping the puck from his guy," Lee said. "He got it most of the way, except for the last six inches. A garbage goal."

Nelson was credited with an assist on that goal, and he also scored in the first period. Henrik Zetterberg scored for the Red Wings.

The Islanders trail Pittsburgh by two points for the best record in the Eastern Conference.

Detroit goalie Jimmy Howard left after the first period with a lower-body injury. His counterpart, Jaroslav Halak, had 17 saves for New York.

The Red Wings have lost five in a row, three in shootouts. The Islanders outshot Detroit 32-18.

Mrazek replaced Howard with the score 1-all after the first, and he immediately made a sparkling save on Nelson, stretching his left pad to stop the New York centre's shot from close range. But Nelson was back in front of the net later in the period after taking the puck from Sheahan, and Lee eventually scored.

"The story of the year, so far, is how we find different ways to win," Nelson said. "The last two games, we've played well defensively."

The Islanders have won three straight.

Detroit's Johan Franzen nearly tied it in the final seconds of the second period, but New York's Calvin de Haan deflected that effort over the goal.

Gustav Nyquist and Zetterberg each hit the post for Detroit in the third.

"I didn't mind tonight's game. I thought our effort was good," Babcock said. "I would have liked to have seen us execute on a few plays a little better, but I thought Mrazek was fantastic coming off the bench."

Zetterberg one-timed a shot through traffic and past Halak to give the Red Wings a 1-0 lead, but Nelson tied it later in the first. With the puck loose in front of the crease, Nelson went diving for it and knocked it under Howard before the goalie could cover it.

"Tough building to come in and play. They came out hard and we were able to weather it. Got back to our game plan," Nelson said. "You've got to get to the front (of the net) to score goals. Coaches harp on that — got to get big bodies to the net."