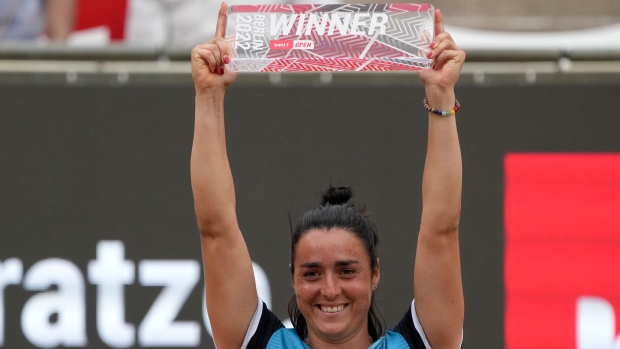 BERLIN (AP) — Ons Jabeur won the Berlin Open on Sunday. In the moment, it didn't matter to her at all.

Jabeur was leading 6-3, 2-1 when Belinda Bencic signaled she couldn't continue in the final after hurting her left ankle in a fall in the first set. Jabeur gave Bencic words of comfort at the net, then hurriedly prepared a cooler with ice for the Swiss player to rest her injured ankle.

“I told her, ‘Forget about it, forget about today.’ The most important thing for me is that she's OK,” Jabeur said.

Jabeur moves to 3-5 in career finals, almost a year to the day since the Tunisian won the Birmingham Classic and became the first Arab woman to lift a WTA singles title. Since then, she has surged up the rankings to become a fixture in the top five and won a notable victory at the Madrid Open last month. Her flag-waving Tunisian fans have been a fixture in Berlin all week and were in full voice Sunday.

Bencic started the match slowly, possibly due to fatigue from her grueling run of four three-set matches this week, but was soon firmly in the contest. She slipped and hurt her ankle chasing a wide serve while at deuce with Jabeur leading 5-3 in the first set. It was in a hard-fought game with four break points for Bencic.

Jabeur served out the first set before Bencic, last year's Olympic gold medalist, tried to play on in the second. She was in clear discomfort when serving and retired after Jabeur broke in the third game.

“You deserve this title and I really don't want to take this moment away from you,” Bencic told Jabeur.