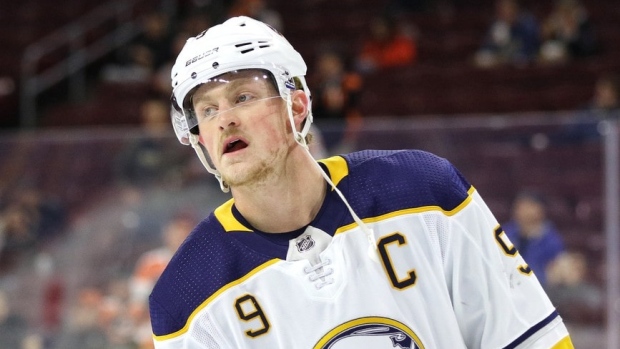 It appears things between Jack Eichel and the Buffalo Sabres are deteriorating quickly.

Peter Fish and Peter Donatelli, Eichel’s agents, released a statement Friday evening saying the Sabres are holding up a medical procedure Eichel feels most comfortable having to fix a herniated disc in his back.

“In response to the Sabres’ statement regarding being in control of the process, Jack Eichel under contract, and other comments, we offer the following response:

‘The process is not working. As we previously stated, we fully anticipated a trade by the start of the NHL free agency period. After the agreed upon and prescribed period for conservative rehabilitation lapsed in early June 2021, it was determined by the Sabres medical staff that a surgical procedure was required. The recommendation by Jack’s independent neurosurgeon, other spine specialists consulted, and the surgery Jack feels most comfortable having in order to correct a herniated disc in his back is to proceed with Artificial Disc Replacement surgery. A further point of concern is that our camp was initially under the impression that the Sabres specialist was in agreement with the Artificial Disc Replacement surgery until that was no longer the case.

What is being left out of the discussion is that Jack would be able to play in the NHL for the start of the season pending medical clearance if he were allowed to have the surgery he desires as of this date. Repeated requests have been made to the Sabres since early June to no avail. This process is stopping Jack from playing in the NHL and it is not working,’” his agents said in a statement to John Vogl of The Athletic.

Eichel was limited to 21 games this past season due to a neck injury and later said there was a "disconnect" with the Sabres over how to handle the issue. The 24-year-old has been the subject of trade rumours for months after Buffalo closed out yet another disappointing season, but TSN Hockey Insider Darren Dreger reported earlier this week the organization feels no pressure to move him.

Sabres general manager Kevyn Adams reiterated that in a news conference on Thursday, telling reporters the team is “in control of the process.”

"What's critically important to make sure is clear is that we're in control of this process," he told reporters in a Zoom call. "We have a player under contract. We don't feel any pressure.

"If there's a deal out there that we feel is the right thing for the Buffalo Sabres, that's going to help us improve – whether that's improve right away or improve down the road, those are all the things we weigh – we'd be open to it. But we're not in a position where we feel we're just going to do something to do it. That doesn't make any sense."

"We want players that want to be here. I'll start with that," Adams said. "But we have players on our team that are under contract, and we aren't going to do something that we don't think makes sense for our franchise."