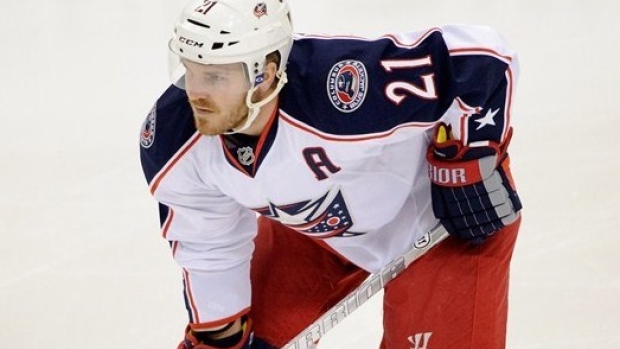 The Columbus Blue Jackets have traded defenceman James Wisniewski and a third-round draft pick in 2015 to the Anaheim Ducks in exchange for Rene Bourque, William Karlsson and a second-round pick in 2015 .

Wisniewski, 31, has scored 8 goals and 21 assists in 56 games this season with the Blue Jackets.

He is currently in the fourth year of a six-year deal he signed with the Blue Jackets prior to the 2011-12 season worth an average annual value of $5.5 million.

He won gold at the 2004 World Junior Championships as a member of the American team.

Bourque, 33, cleared waivers on Monday afternoon. He was acquired by the Ducks in a November deal for defenceman Bryan Allen from the Montreal Canadiens.

In 43 games this season with the Canadiens and Ducks, Bourque has two goals and eight assists.

Karlsson, taken in the second round of the 2011 NHL Entry Draft, is in his first year in the NHL. In 18 games this season, the 22-year-old centre has two goals and an assist.

The third-rounder that the Ducks will receive in the transaction originally belonged to the Detroit Red Wings.