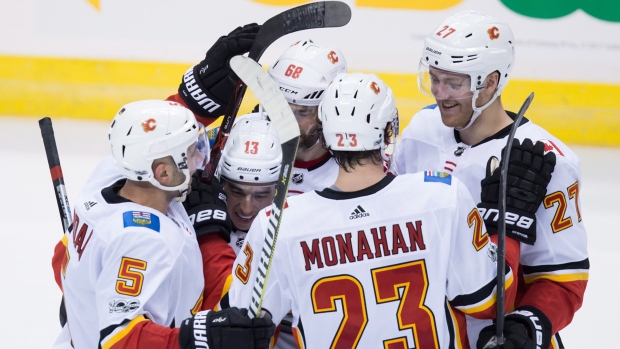 VANCOUVER — The message to the Calgary Flames after Friday's drubbing at the hands of the Ottawa Senators was simple — stay out of the penalty box.

They didn't heed the message, but managed to survive this time around against a feeble Vancouver Canucks power play.

Dougie Hamilton had two goals and Jaromir Jagr recorded his first point for Calgary as the Flames defeated the Canucks 5-2 on Saturday night despite having to kill off five penalties in the opening 20 minutes.

"Our penalty killers, they did a good job, but we got lucky," said Flames head coach Glen Gulutzan. "You can't do that. We're dodging bullets here and we've got to get that cleaned up."

The Flames allowed two goals in seven man-advantage opportunities against Ottawa in a 6-0 loss on home ice 24 hours earlier, but were much better against the Canucks, who finished 0 for 7 with just three shots.

"Penalties are coming in bunches right now," said Giordano. "We've got to move our feet more."

Derek Dorsett and Brock Boeser replied for Vancouver (1-2-1), while Jacob Markstrom stopped 22 shots as the Canucks dropped their third straight at home, and second in regulation, after opening the season with a victory at Rogers Arena.

"We had a good opportunity in the first period ... you get five power plays against a team that played last night, we need to get a goal," said Vancouver head coach Travis Green. "They got some momentum off their penalty kill."

After the Flames survived that early parade to the penalty box, Hamonic pinched down from the point and fired a quick shot through Markstrom to snap a 1-1 tie at 10:57 of the second.

Smith, who made his sixth straight start to open the season despite allowing five goals on 22 shots Friday, robbed Boeser with just over two minutes to go in the period with a great glove save.

That stop proved to be crucial as Hamilton's drive from the blue line beat Markstrom moments later at 17:59 to stretch Calgary's advantage to 3-1 through 40 minutes.

"Any time you don't play well, you want to get back in there as soon as possible," said Smith. "We looked at the schedule coming up here, we have some days to practice and get some rest."

Playing their third game in four nights in three different cities, the Flames made it 4-1 at 10:14 of the third when Gaudreau scored a power-play goal on a pass that went in off Vancouver defenceman Michael Del Zotto after taking a feed from the Jagr. The Czech winger signed a one-year deal with Calgary earlier this month.

Boeser responded nine seconds later with a quick shot that beat Smith past his glove, but Hamilton put any thoughts of a comeback to rest when his shot beat Markstrom just 48 seconds after that.

"We talked before the game about being more disciplined, cut the penalties down," said Jagr. "It didn't really happen in the first period. After that it was OK."

The Flames opened the scoring at 11:37 of the first on a short-handed 3-on-1 rush moments after the Canucks failed to register a shot on a 5-on-3 power play that lasted 1:11. With his team still down a man, Giordano took a pass from Freddie Hamilton and beat Markstrom shortside for the 100th goal of his career.

Vancouver's attack registered just one shot in a combined 8:49 of power-play time in the first. The Flames, meanwhile, had two short-handed shots before Dorsett made it 1-1 late in the period at even strength.

"You're not going to win a lot of games if that happens," forward Daniel Sedin said of the Canucks' struggles with the man advantage. "Five on five, I thought we played good enough to win, we had enough chances to score.

"You have to capitalize."

Notes: With defenceman Alexander Edler out four to six weeks with a sprained knee, Derek Pouliot suited up for his first game for Vancouver. ... The Canucks played most of the night with 11 forwards after Loui Eriksson left in the first with a knee injury. ... Vancouver now hits the road for five straight beginning Tuesday in Ottawa. ... Calgary is off until Thursday when the Flames open a two-game homestand against Carolina.