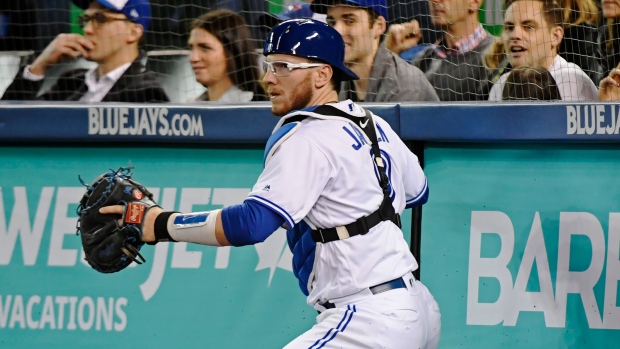 With about six weeks to go before the Toronto Blue Jays pack up for the winter, manager Charlie Montoyo is setting up auditions all over the roster.

One of the more interesting ones is behind the plate, where Danny Jansen has carried the bulk of the workload this season, playing 90 games and accumulating 319 plate appearances.

Seen as the catcher of the future coming into the season, the 24-year-old is still in the driver’s seat when it comes to who will be getting the lion’s share of the work in 2020, but Montoyo wants to see what recently-recalled backup Reese McGuire can do and announced the pair would split time down the stretch.

Sporting an overall slash line of .212/.283/.375, Jansen struggled with the bat in the first half of the season, but his defence has carried him to the 12th-most valuable season thus far amongst catchers at 1.5 fWAR.

But since then, Jansen has hit .265/.321/.551 with 13 extra-base hits, including seven homers, and has generally looked like the well-rounded catcher the Blue Jays saw posting a .396 on-base percentage and an .884 OPS across parts of two seasons at Triple-A Buffalo.

Thanks to Luke Maile’s oblique injury, McGuire, who comes with the reputation of being a solid defender but with a light bat, has now nudged his way into a timeshare.

Jays coach John Schneider, who spends most of his time working with the catchers, knows the ins and outs of their skillsets and he’ll be watching closely down the stretch.

“You’ve got two really strong framers, blockers, throwers and the pitching staff is comfortable with both of them when they’re behind the plate,” Schneider said. “For now, and maybe long-term, it works as a good combo. I think there’s still a little bit of finding out about both of them because they’re both in the early stages of their major-league careers.

“It gives Reese a chance to catch up on some major-league at-bats, it gives Charlie a chance to kind of play some matchups a little bit from an offensive standpoint to kind of put them in spots to have success. Part of it is reps for Reese, part of it is continued reps for Jano, but by no means is it, in my mind at least, or in his mind should it be a demotion (for Jansen). I think it’s a good tag team, it’s a good duo right now.”

With McGuire hitting left-handed and Jansen right, they complement each other well, and they already have a working relationship from their time in the minors.

Their ability to frame pitches and steal strikes is something this current management group values highly, and that skill has really caught on around baseball over the last few years.

While McGuire only has a 63-inning sample size, his framing has also graded out well at +0.9 already in seven starts behind the dish.

“We just did some work on it like three days ago and Reese and I have pretty similar moves,” Jansen said. “We both try to go down and up and have a fluid motion, and he’s really good at it. We do talk about it. That’s a big stat in the game now and people look at that. Say you’re at a 1-1 count and you steal a pitch to go 1-2, it changes the whole at-bat rather than 2-1. That’s a big part of the game.”

Controlling the running game is important.

So is blocking baseballs in the dirt.

But receiving and the ability to steal strikes impacts the game on every single pitch, and, as Jansen points out, it can have a huge impact.

“They’re both outstanding,” Schneider said. “Jano’s top 10 in baseball and the improvement he’s made from last year to this year have been astounding, really, when you look at the external numbers and our own internal numbers. It’s something the organization puts a lot of stock into and they value it, just as every team around baseball does. When you have two guys who are really good at it, it benefits the entire staff, cuts down on pitches thrown, it cuts down on pitchers used, all that kind of stuff. It’s something we work on all the time.”

While Jansen turned his season around offensively with a load adjustment to better time up major-league fastballs, McGuire has tried to tweak his approach this season in Triple-A.

It’s the same approach change most of baseball has undergone recently in this power-driven age of home runs and strikeouts.

“For me, it’s take my A swing and if I swing and miss, it’s OK,” said McGuire, who was batting .247 with five homers at the time of his recall. “I used to be pretty good at manipulating my swing just to make contact and the next thing you know it’s kind of a little pop-up or a ground ball and I’m going back to the dugout like, ‘Man, I wish I would’ve just swung and missed with that pitch because I’d still be in there, battling.’ I think, for me, it was just starting to swing up a little bit more, try to hit for power, doubles and homers. In hand, I swing and miss a little bit more, but it’s on the pitches I don’t want to put in play.”

At this point, it would be surprising if Jansen and McGuire didn’t start the 2020 as the duo behind the plate, but there’s a ton of intriguing backstop options coming up through the system.

Riley Adams, a 23-year-old third-round pick in 2017 from the University of San Diego, has reached Double-A and is the closest of a group of four interesting future options.

Behind him is Alejandro Kirk, a portly product of Mexico who’s proven to be a contact machine, slashing .297/.404/.462 at Low-A Lansing and High-A Dunedin.

Impressively, Kirk, 20, has walked 48 times this season and struck out just 35 times.

Perhaps the most intriguing is 19-year-old Venezuelan Gabriel Moreno, who recently cracked MLB Pipeline’s top 10 in the Jays’ system at No. 9, while Kirk sits at No. 13 and Adams at No. 28.

Behind that trio is 2019 ninth-round draft pick Philip Clarke, 21, who just entered pro ball at short-season Vancouver, fresh off a College World Series win with Vanderbilt.

It’s an impressive stable, one that eventually could help Blue Jays GM Ross Atkins creatively turn a surplus of an important commodity into pitching via trade.

“When you have a guy kind of at every stop, it’s a luxury to have in the organization,” Schneider said. “Ken Huckaby, our coordinator, does a phenomenal job with them and I’m kind of an extension of him and we’re in contact about what they’re doing and what we’re doing and ideas that we come up with together of how we can evolve and improve and try to stay ahead of the curve.

“It’s cool to have a variety of different types of catchers, whether it be offence or defence, and it’s a luxury to know you have guys coming.”​