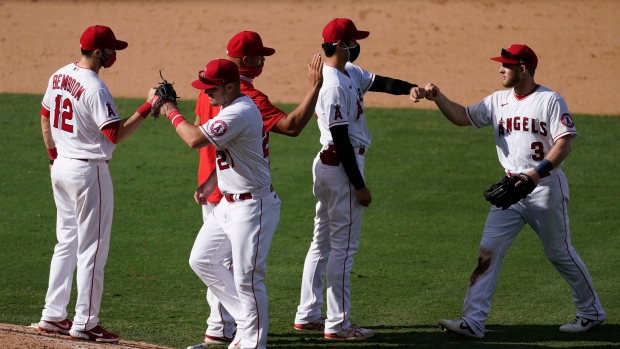 ANAHEIM, Calif. — Jared Walsh was a 39th-round pick who got a humble $3,000 signing bonus from the Los Angeles Angels. He used his cash to pay for an off-season of workouts, and then he never stopped grinding.

Five years later, the 27-year-old rookie is the AL's leader in slugging percentage for September, and he's standing out in a lineup featuring Mike Trout, Anthony Rendon and Albert Pujols.

Walsh's grand slam against the Texas Rangers on Monday is just the latest superlative in an improbable success story that's getting better almost every day.

“It’s been really exciting,” Walsh said. “Something you dream about your whole life. Try not to get too sentimental. I’ll wait until the off-season to do that, but I'm just enjoying every day I get to play. It’s pretty special.”

Walsh hit his first career grand slam during the Angels' seven-run fourth inning in an 8-5 victory over Texas.

Max Stassi had a two-run single in the final home game of the fifth consecutive losing season for the Angels (24-31), who have nevertheless won 12 of 18 overall after taking three of four from Texas.

Walsh extended his hitting streak to 13 games when he mashed a sinker from Kyle Gibson (2-6) 450 feet over the ficus trees behind the centre-field fence at the Big A. Walsh’s eighth homer of the season was also the seventh in 12 games for an erstwhile two-way player who has found an impressive groove at the plate.

“It's exciting,” Angels manager Joe Maddon said. “He works such good at-bats. Give him credit. He's been working really hard, and it's showing up.”

Walsh paused a moment to watch his grand slam sail out of the park, even though he still felt a bit of doubt about a no-doubt homer: “I probably would have looked like an idiot had it not gone out.”

Isiah Kiner-Falefa and Derek Dietrich homered for the last-place Rangers, who have lost five of seven.

Bundy (6-3) allowed three runs over five inconsistent innings, but still bounced back from his shortest start of the season with another win.

Kiner-Falefa connected on Bundy's 11th pitch, giving a first-inning homer to the Rangers in their third straight game. That's the longest such streak for Texas since September 2004.

Texas added another run in the second when Anderson Tejeda's ground ball ricocheted off first base and past Walsh for a fortunate RBI double, and another in the third on Nick Solak's RBI single.

But Shohei Ohtani scored the Angels' first run in the second inning, and he scored again on Stassi's bases-loaded single in the fourth. Andrelton Simmons put the Halos ahead with an RBI single moments before Walsh's grand slam.

“We basically gave them that inning," Rangers manager Chris Woodward said. “That’s the frustrating part, because I felt like we were in control the whole game up to that point. You know with Bundy, we had a really good approach. It felt like we were doing things on the bases, having quality at-bats. It kind of takes the air out of everybody.”

Dietrich hit a two-run homer off Hoby Milner in the sixth, but the Angels bullpen didn't allow another hit. Mike Mayers got six outs to earn his first save of the season and the second of his five-year major league career.

The home finale was one of the last milestones in another disappointing year for the Angels, whose streak of five straight losing seasons is the franchise’s longest such stretch since the 1970s. The big-budget Halos haven’t been to the playoffs since 2014 in the ostensible prime of three-time AL MVP Trout, who tripled in the seventh.

The Angels began the day 4 1/2 games behind Houston and Toronto for a playoff spot. With five games left, Bundy said the Angels plan to “play hard and win them all. If we don’t, so be it, but it’s definitely not lack of trying out there. With the lineup we’ve got and the pitchers we have, there’s definitely a chance.”

Rendon was ejected by umpire Kyle McCrady in the seventh for arguing about a high called third strike. Rendon went 1 for 4 with a season-high three strikeouts.

Rangers: 1B Ronald Guzmán didn't play because of a tight hamstring. ... C Jose Trevino is likely to miss the rest of the season with his sprained left wrist, Woodward said.

Rangers: Jordan Lyle (1-5, 7.07 ERA) takes the mound in a series opener at Arizona on Tuesday. The right-hander is coming off his first quality start for Texas.

Angels: Griffin Canning (1-3, 4.29 ERA) looks to build on his first win of the season when he starts the series opener at playoff-bound San Diego on Tuesday.