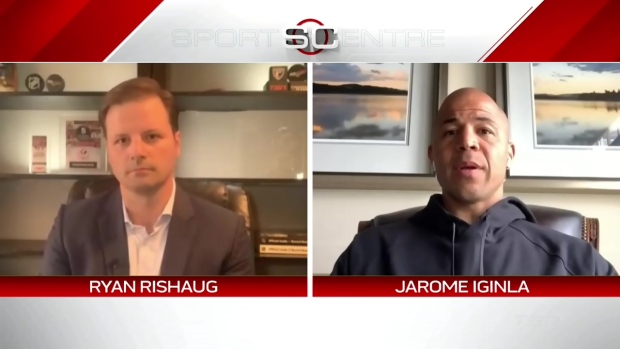 Long-time NHL superstar Jarome Iginla joins TSN’s Ryan Rishaug to discuss the emotions he felt following the death of George Floyd, whether or not he believes there will be real change in both the NHL and the outside world as well as improving accessibility for kids growing up looking to play the game he loves.

Here is a lightly edited transcript of their conversation:

Rishaug: Thanks so much for taking the time to chat with us here today. Can you reflect on some of the emotions that you felt over the last week or so since the death of George Floyd and the subsequent protests? With all that you’ve seen and witness, what emotions have you experienced through that?

Iginla: Well it’s been very powerful. Very hard to watch. You know, as you’ve seen and many people have seen around the world the death of George Floyd, the brutal video and Ahmaud Arbery all within the last two to three weeks. The protests are huge, to me they’re very important and they’re very powerful and I hope they do continue and I hope they continue peacefully and the message doesn’t get lost and can translate into some real change in our society and also in the United States that hopefully it spurs people to go out and be passionate voters and get out there and change what’s going on. I think there’s obviously a lot more talk in Canada and the NHL with players and awareness and I think that’s a great thing seeing the players speak up. So really horrible incidents but hopefully some real positive change can come from it long-term.

Rishaug: We’ve heard in recent days a lot of players speaking up using their social media platforms to get the message out there. In particular a lot of white NHL players have come out and said we want to learn, we want to listen, we want to understand how we can do better. Over 100 I think at this point and the number continues to grow. What would your message be to those white players who want to try and be part of some positive change and feel like they need to listen? What would your message be to them about [what] tangible change actually looks like?

Iginla: Well I think it’s great. I think more positive voices is very important. It is a very sensitive subject and it’s hard to always know what the right thing to say is and how to word it, and I think the most important thing is where the message is coming from in the heart and trying to bring about change and do something positive. And I haven’t read a ton of the different players’ posts, but I have seen some speak up. [Jonathan] Toews, [Sidney] Crosby, [Patrice] Bergeron and [Blake] Wheeler and I think that’s great and I think that’s great for awareness and for people to keep learning, myself included. Just to have more dialogue and also I think it’s going to be great in dressing rooms in the NHL. Just for more awareness and for people to be more proactive and not be silent if they hear something that is offside towards Black players but also all players. Being that the NHL is a great game and part of what makes it so great is how diverse it is. I really enjoyed going into a locker room – and I grew up in St. Albert just outside Edmonton – you make the NHL and you’re playing with people that are from Russia and Sweden and Finland and many different places.

Rishaug: There seems to be skepticism that the best of intentions that are being stated right now, while we’re in this moment that we’re in, that as things begin to resume that they’re tougher to follow through on. Are you seeing things right now that give you confidence there will be tangible change moving forward and that this isn’t just about saying the right things in the moment?

Rishaug: It’s not as though this is a new problem with regards to the NHL. There have been instances of racial slurs that go back a number of years. Why do you think it’s taken this long for this type of momentum to catch on within the players of the NHL because we have seen a lot of these instances over a number of years?

Iginla: Like I say, my experience in the NHL and my growing up as a player – a Black player – I didn’t have one person call me the N-word. I didn’t have that. That doesn’t mean other people didn’t. I played a long time in the NHL and I felt like I was always treated the same. And I know that’s not always the case. The more stories I hear to be honest are not about the NHL. When I talk to players that I played with and hear Akim Aliu’s story a lot of it is growing up and through the system. One story is too many to hear. I’ve definitely heard, as you have, different stories but the NHL since I broke in – I broke in 20-some years ago – I think they had more of a push and I was very fortunate to come in at that time because it wasn’t always the case in the NHL especially when you hear there were more racial slurs before. More fans doing things that are completely inappropriate. But as far as players, since I broke in, the NHL had awareness and sensitivity training and I know it can sound like a small thing but I found it was actually a big step for the NHL and the rest of the players because we go to these meetings that we were required to go to, all players had to go to it and you would discuss all the things that were not appropriate at all.

Rishaug: One of the stories you tell about your minor hockey was an incident that happened in the stands where something was said towards you that you weren’t even aware of and some parents on your team stepped in and how much that meant to you. Do you get the sense that more players will feel more comfortable stepping in whatever the incident and that that’s a big part of the answer? That more guys are feeling empowered and comfortable to step in no matter what the situation is and get involved when things are not okay?

Iginla: Absolutely. And I think it was very powerful for me to see as a young kid to have the backup from my teammates and my teammates’ families and know that they had my back. That was huge. That was. I’m very thankful to them and thank those parents that did do that. But yes, I think that will be absolutely the case. Players in the locker room will be empowered, they’ll feel more of an obligation when they’ve said it and I think they’ll want it. I think that they want to help, the guys that I’ve seen and I think there will be lots of people who want to help make the game better. Not just the game, the whole environment. When I say the game it’s not just the on-ice product and everything, it’s being involved in it. The travel together, the locker room, the dinners, with all the time you spend with your teammates, that’s all part of the game as a player. And I think that they will help be more aware of things that are offside or even kind of offside. You know where before a joke that would have been tolerated won’t be tolerated anymore. I think there will be a lot more people speaking up and I think that’ll be a real good thing and will help steer it away. Also, just more education – and I think the NHL will continue to work at it and I hope they do and I believe they will – to keep helping us and helping players to understand what is allowed and what will not be tolerated. And also it’s not just about being tolerated, you want to also embrace that yes, it is a great game and it’s made up of so many different nationalities and races and that’s part of what makes it great and part of the experience to embrace that as players. And also through youth hockey players. In the dressing room at not just high levels but lower levels as well you realize we’re not all the same and that’s a great thing. Coaching now with my kids I to try and get that message across to be a good teammate. Pick each other up, everyone has a bad day. It will be you having a bad day sometimes, but also to be sensitive to each other and to embrace the differences and look for them and enjoy them. So, lots in there for sure, but I really do think the protests are very powerful and I believe in them and I would hope that they would stay peaceful and cause meaningful long-term change.

Rishaug: You talk about the grassroots level of the game and seeing more diversity through the grassroots and that filters up eventually into the National Hockey League. How important is that and do you see positive steps in that way? Can the NHL do even more to try and promote that and make that happen?

Iginla: Well the grassroots is huge for hockey. And I know that since I’ve broken in, the NHL for a long time was working towards trying to make the diversity program and to make the game more for everyone and more accessible for everyone. And it does. It’s a very expensive game for Black families and all families, it’s very expensive. So in order to get more Black players and minority players to play early, I think it needs to be more accessible financially for kids. I really do. In order to get to a high level if you’re fortunate enough to be near an outdoor rink, get that extra skating you can make up for it. But if not, the ice time is so expensive, the equipment is so expensive, it’s not an easy answer. But I know they’re working at it. There’s got to be more ways to make it more accessible. Not just to have more Black players in the NHL but it’s a great game and a ton of fun and you learn a lot of life lessons in it by being part of a team. Great memories. And having more Black kids in hockey, growing up and enjoying it and loving it just because it’s a great thing to be a part of and a great experience. Long-term to get into the NHL and to have more diversity is a big part of it I believe, but I would love to see more kids play, more Black kids, more minorities, just because it’s an unbelievable game to be involved with and teaches so many great lessons. Some of my best friends today are literally kids I played minor hockey with and minor baseball. I think sports are great in so many ways.