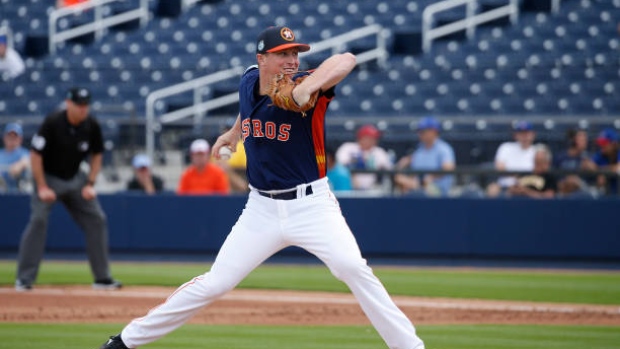 The trade helps address the Blue Jays' depth issues in the starting rotation and in the infield.

Toronto's pitching staff had the fourth-worst earned-run average in Major League Baseball last season at 4.85. A large part of the rotation's struggles were the ongoing injury issues with Nos. 1 and 2 starters Marcus Stroman and Aaron Sanchez.

Thornton could compete for a spot in the starting rotation or join the bullpen. The 25-year-old right-hander posted a 9-8 record with a 4.42 ERA in 24 games for the triple-A Fresno Grizzlies in 2018.

Thornton, from Pittsburgh, owns a career record of 32-19 and a 4.23 ERA over four Minor League seasons with 395 strikeouts and 78 starts in 88 appearances.

At the same time, the return of veteran shortstop Troy Tulowitzki, who missed the entire 2018 season after surgery to remove bone spurs in his right ankle, has created a log jam in the infield.

Devon Travis is the incumbent at second base, Tulowitzki has made it clear he expects to start at short, and Brandon Drury is at the top of the Blue Jays' depth chart at third base.

However, Lourdes Gurriel Jr., had a breakout year in Tulowitzki's absence, while Yangervis Solarte and Richard Urena split time at third last season. On top of that, highly touted prospect Vladimir Guerrero Jr., could finally step into the starting third baseman's role this spring.