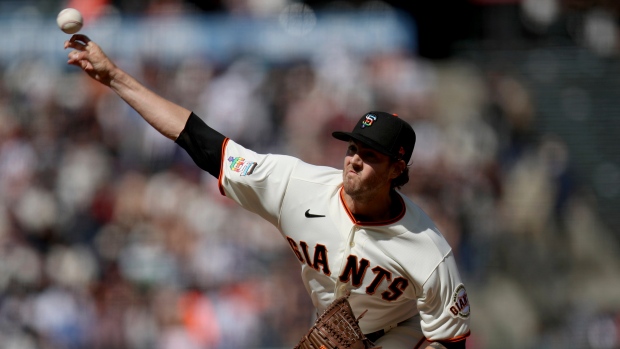 TORONTO - Up to this point, the Toronto Blue Jays have to be smiling about the way their off-season has unfolded.

Yes, Robbie Ray and Marcus Semien parlayed their monster campaigns into huge paydays from Seattle and Texas, respectively, but that was expected and the Jays will recoup a pair of top 100 draft picks in return.

Steven Matz is gone, too, but the José Berríos extension is a major win that cannot be ignored in the big picture, and the Jays quickly replaced Ray’s Cy Young season with another in the form of right-hander Kevin Gausman, who posted a 2.81 ERA and actually exceeded Ray’s fWAR of 3.9 with a 4.8 mark for the NL West champs.

The five-year, $110-million deal ends a years-long courtship of Gausman and pairs him with Berrios atop the Jays rotation for the next half-decade.

It’s a big bet on the 31-year-old, but one that’s arguably safer than betting on Ray at a similar price.

Keeping an elite rotation together was job No. 1 this winter and the Jays have done just that, leaving veteran lefty Hyun Jin Ryu and exciting righty Alek Manoah behind the two horses that both threw 192 innings in 2021.

While the Jays struck in a major way for the third straight winter in luring Gausman, how they go about replacing Semien’s production will define the off-season.

As currently constructed, the offence will still be able to score runs and another depth addition or two could help form productive platoons that come close to replicating what Semien gave them, but will that be good enough to catch the Yankees, Red Sox and Rays?

In addition to No. 5 starter depth, there are two infield holes at second and third, with Cavan Biggio and Santiago Espinal expected to play roles at those spots.

The names Chris Taylor, Trevor Story, Josh Harrison and Kyle Seager have all come up as potential solutions at various price points.

The aforementioned compensation picks will give them the ability to be creative on the trade front - the Jays have attractive big-league trade chips in players like Lourdes Gurriel Jr. and Alejandro Kirk, as well - knowing the system will receive a bit of an talent injection next summer at the draft.

Getting Gausman locked up on the eve of a potential lockout is big, and there’s obvious conviction in this signing just simply based on the recent history.

The Jays were interested in December of 2019 when he was non-tendered by Cincinnati after posting a combined 5.72 ERA with the Reds and Braves, finishing the season as a bullpen afterthought.

A solid shortened 2020 season in San Fran led to more interest, with the Jays tabling around $40 million over three years, a deal that would have looked like a bargain a year later.

This time around, it took almost triple that, but the Jays were finally able to lure the Colorado native and 2012 fourth-overall pick to Toronto.

Heading into his age 31-season, Gausman sure seems to be peaking.

He struck out a career high 227 hitters across 192 frames, limiting opponents to just 150 hits in the process.

The out-pitch is his dominant splitter, a pitch that Gausman threw a career high 35.3 per cent of the time in 2021, holding hitters to a .131 batting average.

He’s a different, more consistent pitcher than the one who teased on occasion during his six seasons with the Baltimore Orioles.

With that said, there’s risk to any deal this long that comes with a $22 million per year hit, especially for a pitcher.

The Gausman bet kept the rotation where it needed to be, but the next steps will determine if the Jays emerge from the winter as a better team on paper.