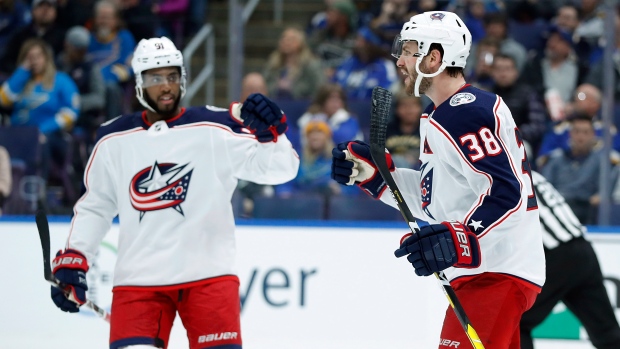 He was even ready to go first.

"Heck, my job should be in question," the second-year Blues boss said following a 7-4 loss to the Columbus Blue Jackets. St. Louis blew a two-goal lead for the second straight game, then kept its locker room closed for 23 minutes for a private meeting.

Players and coaches declined to reveal what was discussed, but the disappointment was clear from a club off to a disappointing 2-4-3 start.

Alexander Steen said it's a matter of work ethic.

"We're not working hard," Steen said. "Other teams are outworking us and taking chances."

Columbus coach John Tortorella wasn't pleased with his team's response after falling behind in their previous game, but the Blue Jackets made up for it. Boone Jenner and Anthony Duclair each scored twice, Josh Anderson had a goal and an assist and David Savard and Seth Jones also scored. Joonas Korpisalo made 33 saves as Columbus snapped a two-game skid.

"I thought we played harder," Tortorella said. "I thought we were hard around the pucks. It was much more consistent of that style of game."

Artemi Panarin had three assists and Scott Harrington, Zach Werenski and Ryan Murray each had two helpers for the Blue Jackets.

"I think all of the opportunities that we missed the past couple of games started going in for us and we were very opportunistic tonight," Duclair said. "We had a rough start but at the same time the two quick goals to start the second really gave us momentum all of the way through."

Vladimir Tarasenko, Jaden Schwartz, Steen and Zach Sanford scored for the Blues. Jake Allen gave up four goals on 21 shots before being lifted for Chad Johnson in the second period. St. Louis gave up a season high in goals.

The Blue Jackets took the lead with two goals in a 76-second span early in the second period. Duclair tied it at 2:01, pouncing on a loose puck in front of the net and tucking in past Allen's pad. Jenner's second of the game gave the Blue Jackets a 3-2 lead at 3:29.

"Obviously the start of the second period propelled us there," Jenner said. "A couple of quick goals happened there for us and we got the lead. That's what happens when you put the work in."

Savard's goal from above the right circle made it 4-2 at 8:58 and chased Allen. Steen's goal with 8:30 left got the Blues within a goal, but Anderson and Duclair countered early in the third put the game away.

"We know they were a hungry team coming into tonight and we were too," Jenner said. "We wanted a response. They're a good team over there."