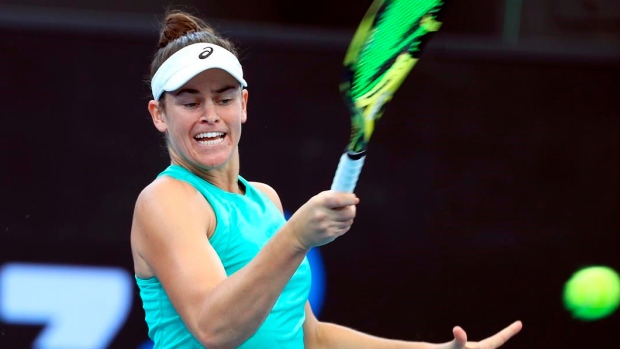 DOHA, Qatar — Jennifer Brady lost her first match since the Australian Open final, falling to Anett Kontaveit 6-1, 6-2 in the first round of the Qatar Open on Monday.

Brady, who lost to Naomi Osaka in her first major final just over a week ago, made 25 unforced errors against her Estonian opponent. Kontaveit had only nine unforced errors and didn't face a single break point against the seventh-seeded American.

“I was expecting a very, very tough match but I'm very happy with the way I played and very pleased to get to the second round,” Kontaveit said.

Kontaveit will play three-time Grand Slam champion Angelique Kerber in the second round after the German beat wild card Cagla Buyukakcay of Turkey 6-4, 6-2.

Garbine Muguruza beat Veronika Kudermetova 6-2, 7-6 (4) to book a second-round match with last year's Doha winner, Aryna Sabalenka, who had a first-round bye. “Good match ahead,” Muguruza said. “I'm excited to face these top players. I feel like every match is hard.”

Eighth-seeded Victoria Azarenka needed six match points to win against Svetlana Kuznetsova 6-2, 6-3 in a first-round match between former Grand Slam champions. Azarenka will play Elena Rybakina or Laura Siegemund in the second round.

Kiki Bertens returned after five months off the tour and was beaten by Jelena Ostapenko 6-0, 6-2. It was the 11th-ranked Dutch player's first match since a fourth-round loss at the French Open in October and a subsequent Achilles tendon operation. She missed the Australian Open to build up fitness.

Maria Sakkari beat Mayar Sherif 6-0, 6-3 in the first round.

U.S. player Amanda Anisimova withdrew from the Doha Open on Monday after injuring her ankle in a fall. The 2019 French Open semifinalist missed the Australian Open because she was in quarantine after a positive coronavirus test before her scheduled charter flight.