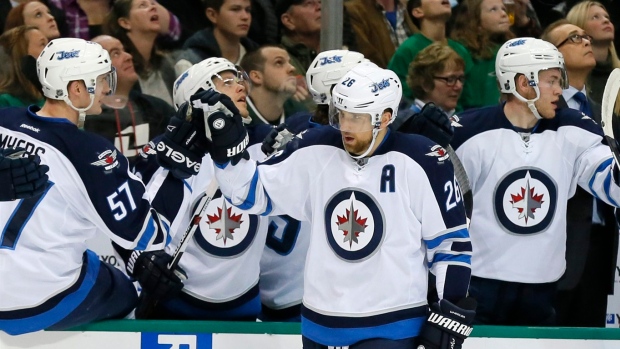 DALLAS - Hours after trading their captain, the short-handed Winnipeg Jets got an offensive boost from a surprising source.

"It was awesome," said Armia, who had two goals in his first 29 NHL games. "I just tried to get a scoring chance for me. I don't know, it just happened. It was good."

Earlier in the day, Winnipeg traded Andrew Ladd to Chicago, where helped the Blackhawks win the Stanley Cup in 2010.

"I'm going to miss him, so it's tough to swallow," said the Jets' Blake Wheeler. "Selfishly I still wish he was sitting right next to me. He goes to a place where he's obviously really comfortable. He knows a lot of those guys, so I think it'll be a good fit for him."

The Jets were also missing centre Bryan Little, out with a season-ending injury.

"I don't know what the drivers are sometimes in terms of emotion and where you get the energy," Winnipeg coach Paul Maurice said. "Having something happen like that raises, intensity's not the right word, but it's more just emotion in the room. So they played quick and they played fast."

Jason Spezza had two goals for Dallas, including the tying score early in the third period, and Tyler Seguin also scored. Patrick Sharp assisted on all three goals. Antti Niemi gave up three goals on eight shots in the opening period, and Kari Lehtonen came on to start the second and finished with 17 saves.

Scheifele had the tiebreaking goal just under 7 minutes into the third, and Armia made it 5-3 just 40 seconds later. Armia also had an assist on Trouba's score with 4:05 left.

Winnipeg scored all of its first-period goals in the five minutes, with Armia making it 3-0 with just under 3 seconds left.

Spezza got the Stars on the scoreboard with a power-play goal just under 2 minutes into the second. Seguin's 32nd of the season, also with the man-advantage, pulled Dallas within one less than 2 minutes later.

Spezza's second of the game tied it at 2:23 of the third.

"It starts with my line," Spezza said. "We were on the ice for three even-strength goals (against). It's embarrassing. We've got to cut down our goals against, we've got to help our goalies out, we've got to play better hockey."

Dallas still leads the Central by one point over Chicago, which lost to Nashville.

In the first period, Wheeler skated in from the right and lifted a shot over Niemi into the upper right corner of the net with 4:57 left.

Just 56 seconds later, the Stars' Valeri Nichushkin went low trying to block Enstrom's shot, but he lifted the puck over Nichushkin and under the crossbar. Armia's shot from the left faceoff circle tricked between Niemi's legs just before time expired.

NOTES: Jets GM Kevin Cheveldayoff said newly acquired C Marko Dano would join the team Friday in Pittsburgh, where Winnipeg will play Saturday. ... With the trade deadline approaching on Monday, scouts from 10 NHL teams were in the press box. ... Also at the game was actor Cuba Gooding Jr., in Dallas to promote FX's "The People v. O.J. Simpson" series. ... Sharp had four assists on Jan. 30, 2015, at Anaheim. ... Scheifele tied his career high of 15 goals, set last season. ... The Jets' Dustin Byfuglien has one assist in each of the last four games.