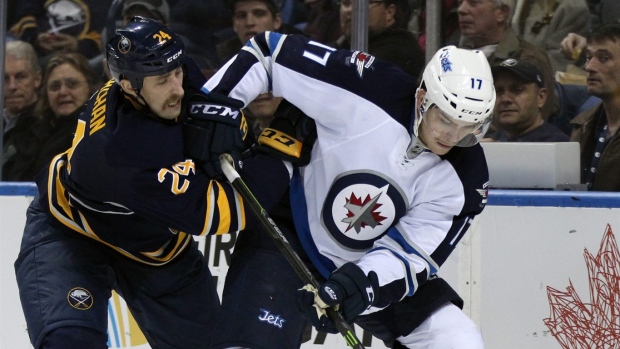 After a quiet 40 minutes, Pavelec made nine of his 19 saves in the final period as the Jets held on to beat the Sabres 2-1 on Wednesday night.

"Every time the game is like that, something's coming," Pavelec said. "It's never like that for 60 minutes. The guys helped me in the first two periods, and it was up to me to help them in the third."

Brian Little and Michael Frolik scored as the Jets built a 2-0 lead before Chris Stewart scored on a breakaway for Buffalo early in the third.

Pavelec's best work came midway through the final period, when he made two saves on Matt Moulson during a 2-on-1. The late action was robust compared to the first two periods, when Buffalo barely made it into the Winnipeg zone.

For the Sabres, it was the end of their season-best, three-game winning streak.

For the Jets and coach Paul Maurice, it was another "ugly" road win.

"It's what we're good at," he said. "That's the kind of people that we have — they're a highly competitive group and we can suffer some adversity over the course of the game and manage to survive."

The Jets won their second road game in two nights and improved to 8-4-2 away from home. They are 4-5-1 at home.

Buffalo was hurt by sloppy play and an ineffective power play that went 0 for 4, including a 5-minute stint late in the second period that included Frolik's short-handed goal.

"That first period and a half or so, I thought our hands were handling that puck like a grenade," Sabres coach Ted Nolan said. "It just kept bouncing and bouncing. That third period, we played the way we have to in order to be successful."

An early roughing call on Patrick Kaleta gave Winnipeg a power play, and Little used Blake Wheeler's screen to beat Enroth over his left shoulder at 3:41 of the first period.

Little has goals in his last three games.

Tyler Ennis energized a listless crowd in the second period when he flipped the puck through two Winnipeg defencemen to build a breakaway chance that was foiled by Pavelec.

Right afterward, Kaleta was boarded by Adam Lowry. The Sabres centre lost some teeth and was bleeding from the mouth, and Lowry was given a 5-minute penalty and a game misconduct.

But Andre Benoit gave the puck away behind his goal, and Frolik put a quick wraparound past Enroth for a short-handed goal with 14:20 gone in the second period.

"I tried to go high there," Frolik said. "I don't even know where I aimed, but I tried to flip it up short side high and it went through him, so it was a good goal."

Stewart made it 2-1 early in the third when he raced to a loose puck and used his backhand to beat Pavelec for a breakaway goal.

Soon after, Pavelec was called upon to stop Moulson.

Buffalo controlled the majority of play in the final period, but Pavelec was up to the challenge.

"I've known Paul for a long time. He's from my hometown and he takes the game very serious, and the way his team plays, they play very hard for him," Nolan said.

NOTES: Sabres defenceman Tyler Myers was a late scratch with a lower-body injury. ... Winnipeg wraps up a three-game road swing Friday in Boston. ... Left wing TJ Galiardi cleared waivers for Winnipeg. ... It was Kaleta's first home game in 14 months after a series of injuries.