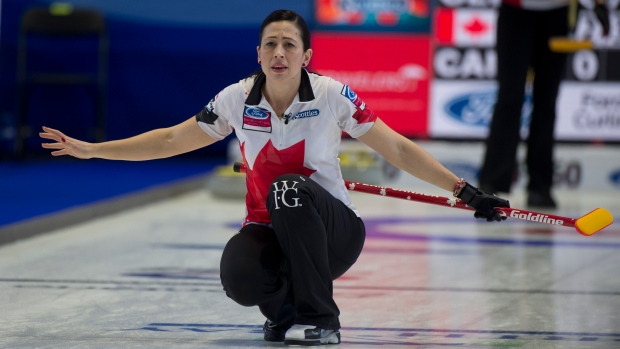 Officer has accepted an offer to join Carey's rink as an alternate at the March 16-24 competition in Silkeborg, Denmark.

"I'm looking forward to doing whatever I can to support what they already have in place and hopefully help them win a world title," Officer told The Canadian Press on Thursday from Winnipeg.

Carey pulled out an 8-6 win over Ontario's Rachel Homan last Sunday to win the Scotties final in Sydney, N.S. The Calgary skip stole two points in an extra end for her second career national title.

Carey did not use a fifth player last week.

"It just all seemed very obvious when we looked through our options," Carey said from Calgary. "She just made so much sense. You can't ask for more experience. She's a hard person not to like, she's so easy to get along with. It was just kind of staring us in the face."

Officer served as a fifth for Jones at a competition in China this season and has also played in a few mixed doubles events.

She played twice last week at the Scotties, subbing in for lead Dawn McEwen in a 9-7 victory over Yukon and filling in for second Jocelyn Peterman in an 8-4 win over Newfoundland and Labrador. The Jones team is ranked fifth in the world but did not make the playoffs.

Carey finished fourth at her previous world championship appearance in 2016 with a different team.

"I have things that I can offer them," Officer said. "But I think I'll obviously pick and choose when that might be because they've already got their (processes) in place and I'm not there to stir the pot."

Alternates have to be ready to replace a teammate in the event of injury or illness. They also often handle duties like rock matching, scouting and preparations.

Officer plans to go over specifics with Carey, third Sarah Wilkes, second Dana Ferguson and lead Rachel Brown ahead of the competition so that she can help support their routine.

"This is a different team from the one that I know," Officer said. "It's easy to step in and be a fifth player for Team Jones. I've been with them for so long, I almost don't even need them to explain what my role is because I know it. But with Team Carey, it's different."

Carey is ranked sixth in the world and will be a favourite to reach the podium in Silkeborg. She earned the top seed at the Scotties with a 9-2 record and beat Saskatchewan's Robyn Silvernagle in the 1-2 Page Playoff game before topping Homan in the championship.

Officer won Olympic gold at the 2014 Sochi Games and helped Jones run the table at the worlds last year as Canada beat Sweden's Anna Hasselborg in the title game.

"It's certainly going to be different to be with a different team and have that different perspective," Officer said.

The opportunity will also allow her to learn from team coach Dan Carey and national coach Elaine Dagg-Jackson. The 43-year-old Officer may turn to coaching in the future and is also considering more broadcasting work.

As for stepping back from being a full-time player, Officer said she has no regrets.

"It's just all an adjustment," she said in Sydney. "It's just different from the routines that I've had for 15 years. But that was exactly what I wanted, that I was done with, that I wanted a break from, was all those same routines. All that same stuff and the repetitiveness. I just couldn't do the grind anymore and I needed to step away.

"So I don't miss some of those routines and stuff but it's hard to find my way because now I'm finding new routines. It's just kind of navigating the waters in that way sometimes."

Officer made 12 Scotties appearances over her career and won two world titles and nine Grand Slams.

She was named the top Canadian women's second of all-time in a recent TSN poll and was sixth on the list of the country's all-time greatest female curlers.