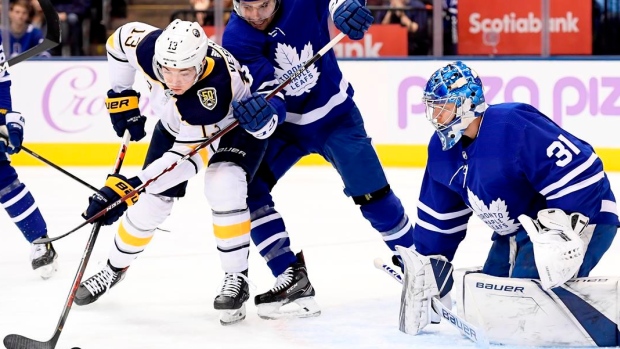 TORONTO —Jimmy Vesey had his pick of teams to land with as a highly touted college free agent in 2016, including a Maple Leafs club that was in hot pursuit of the winger’s services.

Vesey ultimately rejected Toronto’s advances in favour of the New York Rangers, setting up a tumultuous four years that eventually led him back to free agency earlier this month. That’s when the Leafs came calling again, and after hearing some well-placed opinions about the organization, Vesey signed a one-year, $900,000 contract.

“It’s funny the way it works out,” Vesey said during a Zoom call with reporters Thursday. “I have no regrets about the decision I made in 2016. There were family ties [with his father, Jimmy Vesey Sr., working as a Leafs scout]. And this time around, he was all about it. My dad is one of the toughest critics I know, and he has nothing but great things to say about [general manager] Kyle Dubas. And from the conversations I had with Kyle, I was very impressed with his professionalism and I'm excited to be playing for him and for such a first-class organization.”

Vesey is philosophical now about how his NHL tenure has played out, musing that, “They say hockey and life is about the journey and the process and I'm happy where it's taken me so far.” But there’s a sense this deal with Toronto – the least lucrative of his career to date – offers the 27-year-old a chance to prove he’s still that player who garnered so much early attention.

Growing up in the Boston area, Vesey rose through the hockey ranks to become a standout with the Eastern Junior Hockey League’s South Shore Kings, producing 48 goals and 91 points through 45 games in 2011-12 to set league records and earn Most Valuable Player honours.

The NHL took notice, and Nashville selected Vesey in the third round, 66th overall, in the 2012 NHL Entry Draft. Vesey kept his options open though, electing to go to Harvard over signing an NHL contract.

As a freshman for the Crimson, Vesey exploded with 18 points in 27 games, making him the Ivy League Rookie of the Year. In his third season, Vesey scored 32 goals and 58 points in 37 games to become a Hobey Baker Award Finalist. He would take home that trophy as college hockey’s top player the following year, capping off his senior year with a 46-point campaign.

In March 2016, Vesey announced he’d be exercising his right not to sign with the Predators, who subsequently traded his rights to Buffalo. Vesey chose not to stick with the Sabres either, becoming an unrestricted free agent in August 2016.

Calling that period “the most stressful time in my life,” Vesey ended up with a two-year, entry-level contract from New York, and immediately tallied nine points in his first 10 NHL games.

Vesey’s numbers slowly dwindled from there, but the Rangers still inked him to another two-year deal, worth $4.5 million, in July 2018.

Despite putting up a career-high 35-point showing in 2018-19, Vesey was traded to Buffalo on July 1, 2019, and responded with a career-low 20 points in 64 games before the NHL went on pause in March amid the COVID-19 pandemic.

Since Buffalo failed to qualify for the NHL’s postseason tournament last summer, Vesey has had to sit on that poor campaign for eight months. And with a flat salary cap of $81.5 million in place, he wasn’t sure what to expect from free agency.

“I wasn't really happy with my season last year. And It was obviously a stressful time with a lot of uncertainty about what's to come ahead,” Vesey admits. “I think my third year in New York, I was having my best year as a pro. I was on pace to be at 20 goals and 20 assists and then at the end of the year, it got away from me a little bit. Maybe I was thinking too much about hitting those milestones. And then I got traded in the summer and had a tough start to the year, got hurt [early]. I’m not sure if I was looking around waiting for someone else to [step up] since I was unfamiliar with the team, but I've been putting it in my mind this summer that this year I can't do that at all. I'm going to come out with my hair on fire.”

Last season’s poor totals aside, Vesey is still a big winger (6-foot-3, 202 pounds) in his prime, and capable of playing on either side while providing some much-needed weight to the Leafs’ bottom six.

“[Toronto] thought I could add to the team and help them get over the hump, so to speak,” Vesey said. “For me personally, I'm just going to come in with a hungry mindset. I like to pride myself on scoring goals when the time's right, so hopefully I can come in and help the team with some timely goals, especially when [you need] secondary scoring [since] the top guys are obviously not going to score every night.”

Not only does Vesey have a connection to the Leafs through his father, he’s also close friends with former Harvard teammate Alex Kerfoot. They spent three years together in Cambridge, and played on the same line for the final two. During their final season together, Kerfoot centred Vesey’s line and they finished one-two in scoring for the Crimson.

Given the chance, Vesey would relish tapping into that chemistry again.

“I obviously have a very high level of respect for how good of a player he is,” Vesey said. “He can really pass the puck. I'm looking forward to being on a team with him again and maybe getting some ice time with him as well. I talked to him through the whole [free agent] process and it's always great to have a familiar face in the locker room.”

Even before Vesey knew where he’d end up, most of his free time was devoted to fitness, and becoming a player who could contribute at a high level once again.

“I've had the most time I've ever had to prep my body for an NHL season,” he said. “I’ve been in the gym since May. I think my main focus was trying to put on as much strength as I can. I've got a pretty big frame and thought strength was definitely an area I could improve on. My body feels great. I’m just chomping at the bit to get going.”

It’s only then that Vesey can fully put last season behind him and embrace a whole new chapter of his story.

“Coming off a disappointing year in my eyes, I was a little bit nervous to see how it was going to shake out [in free agency],” he said. “Ultimately it came down to Toronto and maybe a few other teams. But I don't think anything can compare to Toronto. It’s one of the most storied franchises in the NHL. I was just talking with Kerfoot about the passion the fans have. It's what you want to play for, and being off since March, I just can't wait to get going.”