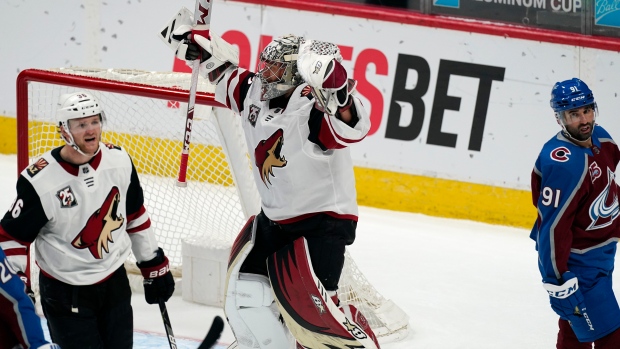 DENVER — Antti Raanta went from sitting on the bench for two hours to saving the game.

No wonder his teammates greeted him at the end with a flurry of hugs and helmet bumps.

The Arizona backup goaltender stopped all 16 shots after taking over early in the third period when Darcy Kuemper left with an injury, Johan Larsson tipped in the go-ahead goal with 15:54 remaining and the Coyotes beat the Colorado Avalanche 3-2 on Monday night.

"You just go there and close your eyes for a second and take a deep breath and focus on the game," Raanta explained of his game plan.

Early in the third, Kuemper dropped down on one knee with the puck going the other way and asked the official to stop play. The trainer momentarily checked on him before Kuemper skated off and was replaced by Raanta.

The backup quickly threw on his helmet, skated to the goal, took a few stretches and then it was go time. He soon went from cold to sizzling.

“The only thing you think about is just to make the first save,” Raanta said. “That’s how you’re going to get forward with your feelings. You start feeling more comfortable there when you get that first save. It doesn’t really matter what kind of save it is, if it hits your head or your toe — at least you made that first save. From there on, you just try to keep going.”

Soon after Larsson’s goal, Raanta turned back Matt Calvert’s shot on a breakaway. Raanta also helped the Coyotes weather a high-sticking penalty with 2:14 remaining — and when Colorado pulled goaltender Philipp Grubauer for an extra skater.

Mikko Rantanen snapped his stick in frustration after his shot at the buzzer was blocked.

Larsson scored with what looked like one hand on his stick and the other holding off a defenceman in front of the goal as Arizona recovered after blowing a two-goal lead.

Derick Brassard and Jakob Chychrun had first-period goals for the Coyotes, who started a seven-game trip on the right note. Clayton Keller and Oliver Ekman-Larsson each added two assists.

Kuemper had 17 saves before leaving with a lower-body injury. Coach Rick Tocchet said he will be evaluated Tuesday.

Colorado trailed 2-0 midway through the second period before getting goals from Valeri Nichushkin and Andre Burakovsky.

“It seems like right now we’re playing games where we’re making every goalie that we play look like they’re an All Star,” Avalanche coach Jared Bednar said. “We can’t continue with that."

The Avalanche dropped to 1-1-1 on their nine-game homestand, the longest continuous homestand in franchise history.

Keller assisted on goals by Brassard, a former Avalanche player, and Chychrun to extend his points streak to five games. He's got three goals and four assists over the stretch.

“Just knowing Mac from the last few years, when he gets to this point he’s chomping at the bit and ready to go,” Bednar said.

The Avalanche had a player return from injury at the same time as losing another. Simply the way the season has gone so far.

“There's going to be bumps and bruises," Calvert said. “Guys are playing through a lot in that room, even the ones that are in the lineup.”

The Coyotes are starting a stint of playing 16 of their next 20 away from home.

“Everybody knows the situation and how big the road trip is for us,” Ekman-Larsson said. “At the same time, we can’t look too far away."