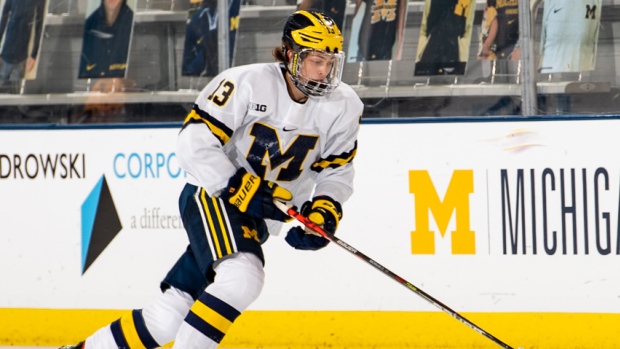 It's been a long and winding road to the World Juniors for Kent Johnson.

"I've felt good for the last probably 13, 14 days," he said. "I've been able to do workouts in my room and stick handle, but obviously it's not too much fun."

"He did a good job of trying to stay active however he could," Power said. "I know he had a stick and a ball and was probably stickhandling all day."

"I couldn't just sulk around in my bedroom," Johnson said. "I mean, this is an opportunity every kid dreams of so I had to do what I could in my room and, honestly, I'm pretty pleased with how I felt in my first skate. It should only get better from here."

The native of Port Moody, B.C. skated as an extra forward at practice and rotated in during drills throughout the 90-minute session.

"He just got out of quarantine late last night," said assistant coach Michael Dyck. "We'll help him ease in a bit before we connect him with his linemates and on a power play...We see him as being a top six left winger."

The fifth overall pick by Columbus in July's National Hockey League draft, Johnson is off to a strong start in NCAA play with 23 points in 17 games. Despite being fresh out of quarantine, Johnson immediately impressed teammates on Sunday.

"He can create so much with the puck," Kingston Frontenacs centre Shane Wright marveled. "He's such a smart player and he's a fun guy to watch out there too. He makes some unbelievable plays."

Johnson's moves in the shootout work after the main practice ended stood out.

"Just some crazy stuff he was doing," Wright said. "It was stuff I could never think of trying or even pull off in a game or even practice here."

"I wouldn't necessarily say he's the fastest guy, but the way he's able to attack you and make your feet cross over and get your feet where he wants them and then just go the other way, it's really hard to defend," Power said.

That talent is why Team Canada was willing to reserve a roster spot even though Johnson was unable to attend the selection camp in Calgary.

"It meant a lot to me," Johnson said. "When I first tested [positive] I was a little nervous and thinking, 'Oh, what if I'm not going to be at camp,' so it meant a lot that they wanted to take me anyways. I just got to prove that they made a great decision."

Team Canada players have picked Connor Bedard and Johnson as the guys most likely to imitate Anaheim's Trevor Zegras and pull off the 'Michigan pass' at the World Juniors.

"We were watching the game together when it happened," Power told BarDown's Corwin McCallum. "He was freaking out so I think if he gets a chance to do it, he'll do it."

Johnson isn't so sure.

"I don't know if I'll be trying that," he said on Sunday. "I've never worked on that. Normally, I work on some stuff before I try it so I doubt I'll be doing it. But, obviously, a pretty cool play."

What does Johnson appreciate about the move?

Will someone pull this off at the World Juniors? pic.twitter.com/KBqTOuN1JP

Will goalies need to be on guard for flip plays from behind the net now?

"It'd be pretty tough," agreed Kamloops' Dylan Garand. "You'd have to be super dialled and, like, be ready for it and see him doing it to have any chance. I feel like it all depends on the guy who's hitting it out of the air and where he's hitting it. That was a pretty nice job by [Sonny] Milano, the guy who scored it, to find that hole. That's pretty tough, to bat it out of the air with accuracy, so you have to hope it hits you, I guess."

"Just hope it hits you," echoed London's Brett Brochu. "You got to hope you're in the right spot at the right time or else you'll be on the highlight reel for months."

Team Canada's shortest player has overcome long odds to make it to the World Juniors.

"I was almost kind of in shock that I actually made this team," admitted 5-foot-8 Kamloops forward Logan Stankoven. "I wasn't even expecting to be invited to the camp, never mind being selected to this team. There's so many great players."

Stankoven, a second-round pick by the Dallas Stars in July's draft, faced an uphill battle at the selection camp after being forced to sit out the first of only two games against U Sports players.

"I was under COVID protocol so that was tough news," the 18-year-old revealed. "It was more of a close-contact situation. It was nothing major. I had went to lunch with a Dallas representative before I took off [for camp] and he was in contact with someone out East who had caught the COVID virus. He was tested and he was negative. He was fine, but I had to be tested as well and my results didn't come back until after the game on Saturday so I couldn’t participate. On Sunday, I was ready to go and I think I left it all out there."

Stankoven scored the first goal in last Sunday's game and hours later learned he'd done enough to be one of 14 forwards on the roster. What earned him the spot?

"Lots of stuff, but energy mainly," said Team Canada head coach Dave Cameron. "Energy and he's a threat to score. Science will dictate there is no such thing as a heavy shot, but he has a heavy shot."

Stankoven, who has 13 goals in 22 games with his hometown Blazers this season, draws inspiration from Montreal's Cole Caufield and Chicago's Alex DeBrincat, a couple of smaller guys with big shots.

"Many people have doubted me," Stankoven said. "When I came up through the ranks people would say, 'Oh, you're too small. You won't be able to make it. You're going to get thrown around out there.' But it's something I can't control, right. So you do what you can with the size. A big saying I [like] is, 'It's not the size of the dog in the fight, it's the size of the heart in the dog.' It's something I always keep in the back of my mind. When I'm out there battling I don't focus on who's the bigger player."

"It's awesome," Stankoven said. "He was in the NHL [with the Anaheim Ducks] to begin the season so it's cool to be on a line with him."

What stands out to McTavish about his linemate?

"How explosive he is in the corners," the Peterborough centre observed. "He can really catch a lot of guys off guard. He's like a little bowling ball out there. He's pretty small, but pretty fierce. I wouldn't want to go into the corner with him."

Despite the positive reviews, Stankoven isn't taking anything for granted. Now that he's on the team, he wants to make the most of the chance.

"I know this is just the beginning of the work," he said. "The standards here with Hockey Canada are to come home with a gold medal so that's what we'll try and do."

"Just teaching him to protect himself," McTavish said. "You never know, maybe someone will get after him in the Dub. Just looking out for him."

"Mase is like a big brother to Bedsy," Wright said. "It's pretty funny to watch."

McTavish, 18, roomed with Bedard, 16, at the World Under-18 Championship in Texas earlier this year.

"We've been really good buddies since the U18s," McTavish said. "We've kept in touch and stuff. He's a great guy and a positive guy too. That's what I like, he's always energetic."

Shane Wright: “Mase is like a big brother to Bedsy. It’s pretty funny to watch.” pic.twitter.com/acU0vYLXyl

Building chemistry quickly is important at a short event like the World Juniors and placing players in rooms together is one way to create those close bonds. But with COVID cases on the rise, Hockey Canada has opted to move the players back into single rooms.

"I like having the roommate for sure," said McTavish, who had been rooming with Bedard again in Banff. "I like it in case you miss an alarm or your alarm doesn't go off, they're always there to bail you out. I like talking to other guys too. I don't like being alone."

Wright had been rooming with Winnipeg defenceman Carson Lambos, who he didn't know that well before the camp.

"I like the roommate, a guy there with me," Wright said. "If I ever miss an alarm or don't know what's going on you can always ask him and hopefully he'll back you up. I like having a roommate around and a guy to chat with."

Not everyone feels that way.

"If we're quarantining, roommates are definitely nice just to have someone there, but I prefer to be by myself if we're not quarantining," Power said with a smile. "It's nice to go to bed when you want, wake up when you want and do whatever you want and not have to agree on times and stuff like that. I'd say I'm a no-roommate guy."

Team Canada's Xavier Bourgault, Edmonton's first-round pick in July's NHL draft, is looking forward to the first of what he hopes will be many big moments in the Alberta capital.

"It's pretty special," the Shawinigan forward said. "It was a lot more motivation for me to make this team, because it is in Edmonton in front of the fans and in my future building. It's pretty nice to play in front of them. All the fans are crazy and there's always a lot of fans during the games so I'm very appreciative."

With 22 goals in 24 games in the Quebec Major Junior Hockey League, Bourgault has scored more than any other player on Team Canada this season.

"Yes, I have a lot of goals, but I think all the players here are very good," he said. "So, everyone can score goals. I had a pretty good start of the season, because my camp in Edmonton gave me a lot of confidence."