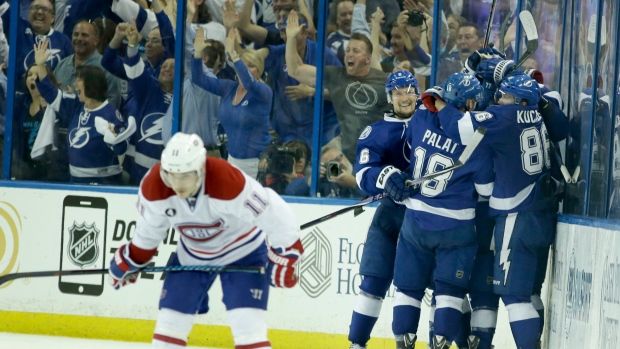 TAMPA, Fla. - On the ice the Montreal Canadiens were out of sorts as the clock ticked away. After the puck went in the net, they stood still and stared at the video screens with blank stares of disbelief.

Tyler Johnson's goal with 1.1 seconds left stunned the Canadiens, giving the Tampa Bay Lightning a 2-1 victory in Game 3 Wednesday night and a three games to none lead in the second-round playoff series. After dominating play most of the night, Montreal faces elimination Thursday back at Amalie Arena.

"We played a hell of a game, had a lot of chances, put so many pucks at the net, hit some posts again," centre Tomas Plekanec said. "It's a bad way to lose."

It was just about the worst way for the Habs to lose with their season essentially on the line. They outshot the Lightning 31-19, controlled the play and the puck, and were a mere moment from overtime and some time to regroup.

Instead, missed assignments by the defensive pair of Andrei Markov and P.K. Subban allowed Victor Hedman to find Johnson all alone in front for his eighth goal of these playoffs.

"It seemed like they had seven guys on the ice, to be honest with you," Subban said. "Just looking around there were guys everywhere. But that's the playoffs. It comes down to one bounce and all you need is one second to win a hockey game."

It took just over a second for Montreal to lose its eighth straight game to Tampa Bay this season, a streak that has shown it's very possible for one team to have another's number. But Wednesday night the Habs were the aggressors, giving off the desperation the Lightning expected given the situation.

After Alex Killorn scored 12 minutes in to give the Lightning the lead, the Habs put the pressure on goaltender Ben Bishop (30 saves), hit the post three times and had countless other chances to tie it. The Lightning endured a shot drought of 18 minutes 41 seconds, and in the third period Brendan Gallagher scored to make it 1-1.

Then the Lightning turned it on, and breakdowns led to one final chance. At that point the previous 59 minutes or so of Montreal domination didn't matter much when Johnson's shot got past goaltender Carey Price.

"I thought we deserved to win a hockey game," Price said. "I didn't come up with the save at the end of the game, so we got what we got now."

Johnson was upset his goal even got reviewed because he didn't think it was up against the buzzer.

"I knew when I jumped on the ice this would probably be the last shift of the period, but I didn't realize when I was standing in front it was that close," Johnson said. "It's pretty cool that it was 1.1 (seconds left)."

Habs coach Michel Therrien said he did not want to point fingers on the game-winner but rather wanted to praise his players' work ethic throughout.

"The commitment that they showed again tonight," Therrien said, "I can't ask for more."

All the Habs would have liked was a chance in overtime, like they did before losing Game 1. After a 6-2 loss in Game 2, Wednesday night's heart-breaker followed to leave players wondering what else they must do.

That wrong side means facing elimination with a short turnaround in Game 4 Thursday. Subban said he and his teammates can't dwell on the bounces that didn't go their way or the ending.

"The good thing is we don't have much time to think about it, so we've got to come back ready to keep our season alive," Subban said.

Notes — David Desharnais returned to the Habs' lineup after missing Game 2 with an illness. He replaced Brian Flynn. ... Injured Lightning forward Cedric Paquette (undisclosed) did not play in Game 3. Jonathan Drouin made his series debut on the fourth line.