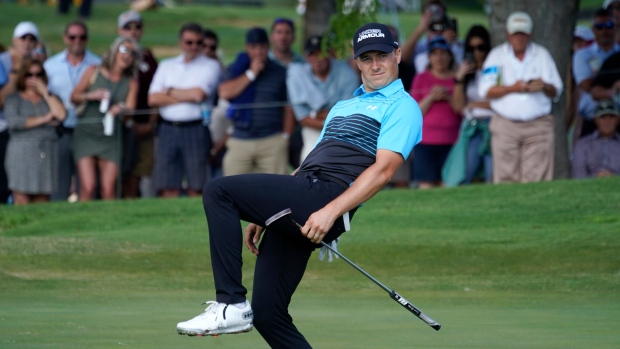 Jordan Spieth can’t pick out a precise moment when he felt he’d finally climbed out of the deep, dark hole into which he’d dug himself. But he’s more than happy to be out of it and proud of the work he did to extricate himself.

This week, the 27-year-old gets another shot at trying to become the sixth golfer to complete the career Grand Slam when he tees off at the PGA Championship at the Ocean Course at Kiawah Island, S.C. For the first time in several years, he’s a legitimate shot to win the Wannamaker Trophy.

“I'm not sure if there was a single turning point,” he said at a press conference on Tuesday. “I think it was kind of a progression of finding some feels that allowed me to stand comfortably over the ball and hit a shot under pressure, and then doing that for multiple days in a row and then having that happen a couple tournaments in a row.”

The return of his fine play came to a head with his win at the Valero Texas Open in April. It was Spieth’s first victory in four years and that, coupled with some consistent play since including a tie for third at the Masters, has put him among the favourites for the year’s second men’s major championship.

It’s been a remarkable return to form for the Dallas, Texas, product who dropped as low as 92nd in the world in January after missing the cut at the Farmers Insurance Open. Along the way in his struggles, he received waves of unsolicited advice about how to fix his problems and plenty of reminders of just how poorly he was playing.

“I think the weirdest part is just when you're out and about at a golf course or even at like a restaurant and someone is like, ‘Hey, you know, hope you figure it out’ or something like that,” Spieth reflected. “I'm like, okay. It's golf. So you've just got to kind of brush and laugh it off and stick to your game plan and believe in yourself, bet on yourself.”

That was a wager that would have paid off well. After that missed cut in January, Spieth had seven top-10 finishes in his next nine starts, including the win in Texas as he finally turned the corner on his troubled game. He’s now looking at winning rather than searching for a solution and the only impediment of late has been a battle with COVID, which he caught after the Masters. That kept him in quarantine and off the practice range for 20 days.

Even though he isn’t thinking about it, Spieth knows that if he nears the top of the leaderboard on Sunday, the discussion of him joining Gary Player, Jack Nicklaus, Gene Sarazen, Ben Hogan and Tiger Woods as players to win all four major titles will heat up. That will be a good problem to have.

“I think as we get into the weekend, if I'm able to work my way into contention, I think it's something that'll obviously be asked and come up, and it's something that I certainly want,” Spieth stated. “You go to a major, and for me at this point, I want to win the Masters as badly as I ever have this year. Didn't happen. I want to win this one as badly as I ever have. Once you move on to the U.S. Open, the same.”

The road back for Spieth has been a difficult one with lots of low moments. That’s what makes savouring this week all the sweeter.