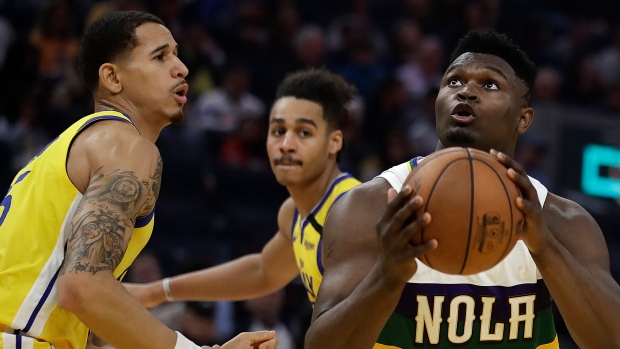 SAN FRANCISCO — Zion Williamson has been a dominant force on the court for New Orleans since making his NBA debut a month ago. Against Golden State, the heralded rookie made his biggest impact in the locker room with a halftime speech that provided the Pelicans with the boost they needed.

Williamson had 28 points and seven rebounds, Jrue Holiday scored 11 of his 23 points in the fourth quarter and New Orleans pulled away late to beat the Golden State Warriors 115-101 on Sunday.

In the Pelicans locker room afterward, the topic of conversation centred around Williamson's halftime pep talk.

“It was one of those things where I just said, ‘Yo, we have to play with more energy. We’re much better than this,’” Williamson said. “When it comes down to it, if I say something then it means I’m into the game and something isn’t right. Obviously we got the win and that’s the most important part.”

Williamson did enough on the court to help New Orleans snap a three-game road losing streak to Golden State.

It’s Williamson’s eighth consecutive game with 20 or more points, the longest stretch by a rookie in the NBA this season. He was 13 of 20 and made his first 3-pointer since his NBA debut on Jan. 22.

And in the short time since, he's already become an important voice on the team.

Nicolo Melli matched his career high with 20 points and six 3-pointers, and Brandon Ingram had 17 points and five assists.

The Pelicans won for the fifth time in six games after dominating the final 12 minutes. New Orleans had six 3s and two dunks in the fourth quarter while outscoring Golden State 38-24.

Holiday led the late surge and got plenty of help. Melli made three 3s and Williamson added a thunderous alley-oop dunk.

Williamson got off to a strong start with a pair of alley-oop dunks and a 3-pointer in the first quarter. The No. 1 overall pick scored nine of the Pelicans’ first 13 points and also got a big block from behind on Warriors centre Eric Paschall under the basket.

“He’s explosive, strong and he knows how to play,” Golden State coach Steve Kerr said of Williamson. “He’s a really great, young player without much experience at all. He’s only going to get better.”

Lee was just as strong for Golden State, making seven of his first nine shots to help the Warriors to a 10-point halftime lead.

CURRY HAS A DATE

Stephen Curry’s hand injury was more serious than originally thought but he continues to target March 1 for his return after missing nearly four months with a broken left hand. The two-time MVP took part in a full contact practice on Saturday, then afterward told reporters that he had suffered nerve damage in his hand when Phoenix centre Aron Baynes fell on him in a game on Oct. 30. His recovery has been going well and if things remain on schedule he hopes to play in a home game against Washington.

BENDER’S BACK IN THE NBA

The Warriors signed 7-foot centre Dragan Bender to a 10-day contract before the game. The fourth overall pick in 2016, Bender played seven games with Milwaukee this season and also spent time in the G-League. Bender had six points and five rebounds against the Pelicans.

Pelicans: Head to Los Angeles to play the Lakers on Tuesday. New Orleans has lost four of five against the Lakers, including two this season.

Warriors: Play the Kings on Tuesday at Chase Center. Sacramento has won both games against Golden State this season.