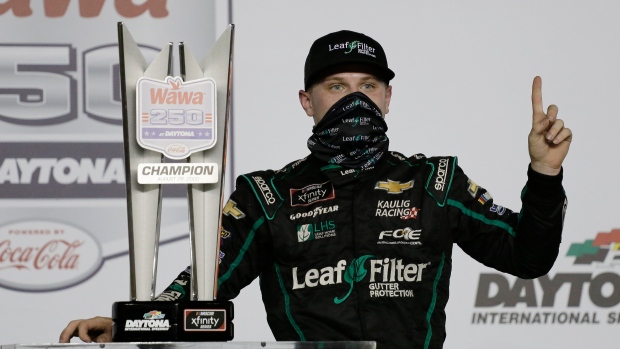 CHARLOTTE, N.C. — Justin Haley will return to Kaulig Racing for a third season in the Xfinity Series.

The team announced the one-year contract extension Monday with a clever social media post in which fan favourite AJ Allmendinger briefly teased that he would be the driver of the No. 11 Chevrolet next year. Instead, Allmendinger peeled the tape off the car to reveal Haley's name.

The extension delays an expected promotion for Haley to a full-time Cup Series ride with Spire Motorsports. Haley, who won a Cup race at Daytona in 2019 driving for Spire, could still run races in NASCAR's top series next year but will be contending for the Xfinity Series title with Kaulig.

Haley has three wins this season, all on superspeedways. He won twice at Talladega and once at Daytona. He was fourth last weekend at Kansas, the opening race in the semifinals of the Xfinity Series playoffs.

Haley indicated in a statement that the offer on the extension from Kaulig came after his Oct. 3 win at Talladega.

“We’ve grown as a team, an organization, and most importantly, as a family," he said. "I feel super blessed to have gotten the call from Kaulig Racing after my second win at Talladega that they wanted me back in 2021.

"They have believed in me since day one, and have stuck with me through the highs and lows. I’m extremely humbled to keep this strong partnership going into 2021 and continue trophy hunting.”

The 21-year-old Haley is two points below the final transfer spot into the Xfinity Series championship round with two races remaining.

Fans have clamoured to see Allmendinger in a full-time ride with Kaulig, particularly since the team has one seat open because Ross Chastain is moving to the Cup Series next year. Allmendinger has two wins in 10 starts for Kaulig in a part-time entry that competes only for wins and is not running for the championship.