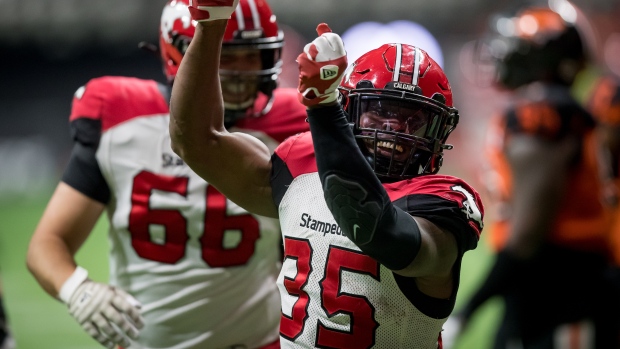 Ka'Deem Carey is staying in Calgary.

The Stampeders announced Monday that Carey has signed a two-year contract, keeping the star running back in Calgary through 2023.

TSN Football Insider Farhan Lalji reports Carey is receiving $130,000 in hard money per season, plus incentives. He was set to become a free agent on Feb. 8.

The 29-year-old Arizona product originally joined the Stamps for the 2019 season after playing 37 games for the Chicago Bears from 2014 to 2016.

“Ka’Deem is a dynamic playmaker who was outstanding for us in 2021,” said Stampeders president and general manager John Hufnagel in a news release. “The ability to run the ball is a critical part of a balanced offence and we’re confident Ka’Deem will be able to do that for us over the next two seasons.”

“I’m so happy to be back with all my guys on the offensive line – we are locked and loaded!” said Carey in the same release. “We have the best o-line in the league and I think Coach Dickie (Dave Dickenson) is the best offensive mind in the CFL.

"I love working with him and the rest of the Calgary coaching staff. It’s a great bunch of guys in that locker room and I love playing in front of the fans in Calgary. Thanks to Huff for having faith in me and I can’t wait to get out there and for us to finish what we started. God is good.”