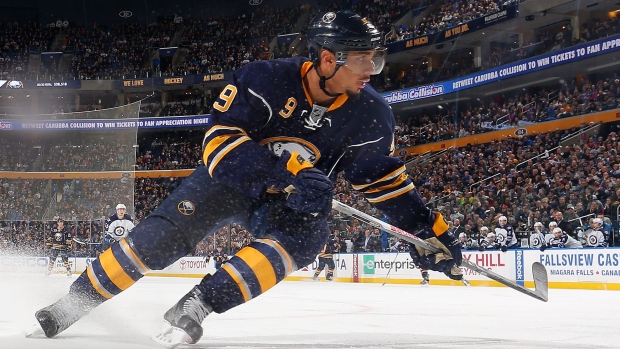 Video by Ted Goldberg of the Buffalo Spectrum News shows Kane checked Bogosian into the boards as he skated with the puck behind the net during a drill. Bogosian stayed on his feet but fell to the ice with Kane a few moments later in the corner of the rink. He was unable to put weight on his left leg as he left the ice.

TSN Hockey Insider Bob McKenzie reports that Bogosian is now likely to miss four to six weeks with the injury.

Minutes later, Falk entered into a heated exchange with Kane and, according to Goldberg, told him to "shut the (expletive) up."

Kane downplayed the significance of the scuffle after the skate, noting the practice continued after the incident.

"I really don't think it's that big of a deal as you guys are gonna be making it out to be," Kane laughed as he told ABC's WKBW Buffalo. "It happens more often than maybe you guys see and, like I said, it was just a battle on one play and it was pretty quickly over after that as you guys saw."

Falk, a veteran of 243 career NHL games, said the frustrations of the Sabres season boiled over.

"It was just stir the moment," Falk added to WKBW. "Emotions are running high this time of year, where we're at. Personally, everyone's got a different situation they're in. Heat of the moment, it boiled over. To be honest maybe a little bit more of stuff like that is what we need (to) get things going here. Get guys playing with a bit more passion and a bit more urgency to help right the ship here."

The Sabres fell 7-4 to Winnipeg Jets on Tuesday night, dropping their record to 10-24-9 on the season. The team sits last in the Eastern Conference, eight points behind the Ottawa Senators.

Bogosian slams hard into the wall, needs to be helped off the ice. Looked like he couldn't put any weight on his left leg #Sabres @WKBW pic.twitter.com/eDa2RWKJNd

Falk, 29, has appeared in 20 games with the Sabres this season, posting a minus-7 rating without recording a point.

Kane, who has been the subject of trade rumours this season, is on pace for career-best numbers with 16 goals and 35 points through 43 games.