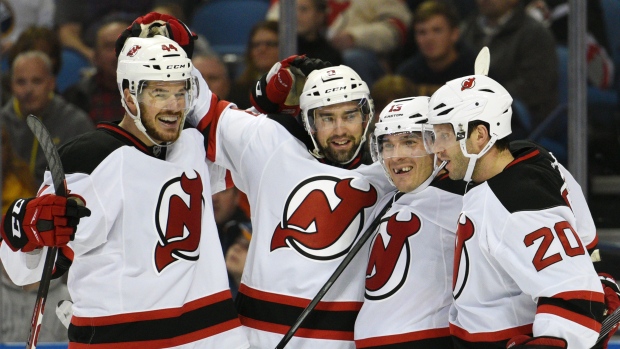 BUFFALO, N.Y. - Down a man and staring down a rookie goaltender, New Jersey Devils centre Adam Henrique all but ensured Saturday night's win over the pesky Buffalo Sabres.

Midway through the third period, Tyler Ennis mishandled a puck at the Devils' blue line, and Henrique darted for a shorthanded breakaway with a backhand finish over goaltender Linus Ullmark.

The score gave New Jersey a two-goal lead, and the Devils held on to win their fourth straight with a 4-3 victory over Buffalo.

"We needed a big kill, obviously," Henrique said. "To bury it and get up by two was a big part in the game."

Henrique added an assist, and linemate Mike Cammalleri had a goal and two assists.

"It was a big goal because you could almost feel the building and their team and the body language," Cammalleri said. "With the guys they have on their team, it feels better to have a two goal lead than one, that's for sure."

Tyler Ennis, Ryan O'Reilly and Jack Eichel scored for Buffalo. It was Ullmark's NHL debut for the 2-6 Sabres.

Buffalo lost Evander Kane to a left knee injury midway through the third period. A high-profile addition last season, Kane needed to be helped off the ice and did not return. Coach Dan Bylsma did not have an update on Kane's condition.

"It's two guys battling and they go in together and he gets turned and they're knee-on-knee that goes into the boards," Bylsma said. "I don't want to speculate."

The Devils trailed 1-0 and 2-1, but took over after Cammalleri's goal tied it 2-2 8:57 into the second. Schlemko put New Jersey ahead with 49 seconds left in the period.

The Sabres thought they had scored 6:54 into the first when David Legwand was tripped by Eric Gelinas, pushing goalie Cory Schneider and the puck into the net. A review upheld the no-goal call.

Buffalo scored moments later on a power play when Ennis sent a slap shot through traffic that flew under Schneider's glove to make it 1-0.

The Devils tied it just before the break. Buffalo native Lee Stempniak forced a shot through traffic that Ullmark pushed wide. Cammalleri found the rebound and threw a wayward backhand toward the crease, where it skittered off Josh Gorges for Henrique to tap home.

O'Reilly then scored on a backhand slap at a loose puck that was redirected in by Schneider - the goalie had lost his stick and punched at the puck with his blocker hand.

New Jersey evened things when Sergey Kalinin carried the puck around the Sabres defence and had his shot kicked away by Ullmark. Cammalleri latched onto the rebound and slotted it past the Sabres goaltender.

"We're in a lot of tight, tight, close games and today was another one of those," Devils coach John Hynes said. "It doesn't matter if its overtime or regulation, as long as we find a way to win."

Ullmark used his shoulder to pop a Henrique shot over the net during a Devils possession midway through the second.

Schneider then made his own strong save, keeping his left pad strong on the post to hold off Nicolas Deslauriers' redirection of Jake McCabe's shot from the point. He also stopped a partial breakaway from Zemgus Girgensons before the period was over.

A nifty string of passes gave New Jersey its first lead, as Schlemko crept in from the right point to slide a low pass from Cammalleri past Ullmark.

The Sabres pulled Ullmark when Brian O'Neill took a hooking penalty with 2:29 to play. Eichel then scored on a low snap shot from the slot, but Buffalo couldn't find the equalizer.

NOTES: Buffalo held a moment of silence for Jimmy Roberts, a five-time Stanley Cup winner as player for Montreal and a former Sabres head coach and assistant, who died Friday. He was 75. ... The game marked a regional reunion for New Jersey's Stephen Gionta and Sabres captain Brian Gionta. The brothers hail from nearby Rochester.