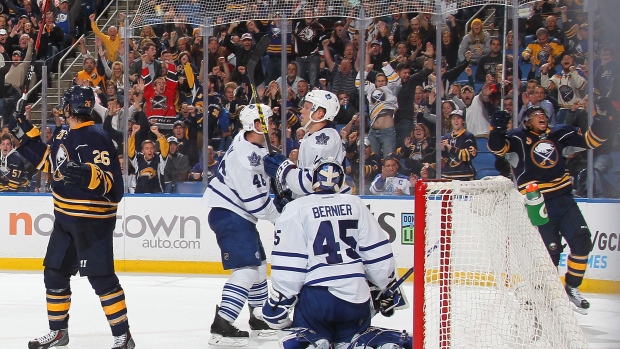 Kane tied it with 4:29 left with his first goal for Buffalo, and the Sabres came back to beat the Toronto Maple Leafs 2-1 in a shootout.

"We felt we weren't going to be shutout, and we made that happen," Kane said.

Kane tied it on the team's 33rd shot when he pushed a wrister over Bernier's shoulder. Buffalo acquired Kane from Winnipeg in February, but he was unable to play until this season after having shoulder surgery.

"We definitely deserved to win that one," Kane said. "We worked hard for it from the start, got down early but kept battling and were able to get the victory."

Matt Moulson and Tyler Ennis scored in the shootout, while Chad Johnson made 23 saves as Buffalo improved to 2-4.

P.A. Parenteau scored and Jonathan Bernier made 34 saves as the Maple Leafs fell to 1-3-2.

Buffalo has won six straight at home against the Leafs, part of a 16-1-1 run of home dominance against Toronto.

Buffalo got off to a fast start, but it was Parenteau who opened the scoring when he redirected Roman Polak's shot from the right point over Johnson's shoulder at the 1:28 mark.

The game went to 3-on-3 overtime, where Buffalo quickly had a 3-on-1 foiled by Bernier.

Johnson made an acrobatic left pad save to stop Kadri deep into overtime, and Toronto missed two further chances to score.

"It happened so fast I was sort of in desperation mode at that point and I just stuck my leg out," Johnson said. "You're just sort of in the moment at that stage of the game."

In the first, Kane picked up a loose puck to spring a 2-on-1 with rookie Jack Eichel, but elected to make a pass that was pushed away from danger.

The pair was responsible for much of the Sabres' attack, with 13 of Buffalo's 35 shots on goal.

"It took us to almost shot 35 to break them," said Eichel. "And we needed that. Maybe now we'll get on a roll, and I think this is a team that can do that."

Bernier made a point-blank stop on Moulson during a Buffalo power play about nine minutes into the period, and then denied Kane moments later.

Off Tyler Ennis' takeaway at the blue line, Nicolas Deslauriers put a shot past Bernier but off the cross bar.

Buffalo finished the first with a 12-6 advantage in shots.

Toronto took eight of the first nine second-period shots, but Buffalo started to find its form with Nick Spaling in the box for interfering with Johnson.

Bernier stopped five shots on the power play, including a pair of scrums near his crease.

Buffalo took control of the third period midway through and raised the Leafs' ire when Kane plowed through Dion Phaneuf near the blue line, dropping Toronto's captain to the ice with a high stick.

"I don't quite understand, we should have been on the power play four minutes in the third and we weren't at all," said Maple Leafs coach Mike Babcock. "So that's disappointing, but it's also part of life."

Ennis and Cody Franson each had chances to beat Bernier during a possession with about six minutes left, but the Toronto goaltender saved both.

Bernier said his strong performance was in response to Babcock.

"He challenged me behind the doors, too," Bernier said. "That's part of the job. I've got to be better. You've got to take it, you can't take it too personally."