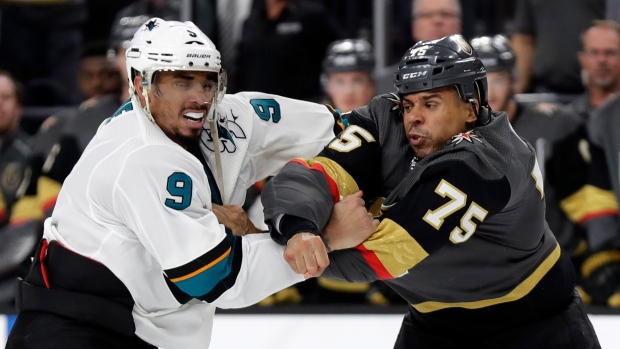 The rivalry between Evander Kane and Ryan Reaves continues to evolve and it went to a new level after their fight in Game 3 of the San Jose Sharks and the Vegas Golden Knights playoff series.

In his comments regarding to Reaves' fighting ability, Kane responded with saying he was "unharmed" after the fight. "For the so-called toughest guy in the league, I don't know if he landed a punch, Kane added. "At times I thought I was fighting the Muffin Man. Didn't expect that, I expected more of a battle."

Kane, on his fight with Reaves: "For the so-called toughest guy in the league, I don't know if he landed a punch. At times, I thought I was fighting the Muffin Man. I didn't expect that, I expected more of a battle."#SJSharks #VegasBorn

“To chirp Jumbo’s vision, a guy who has over 1,000 assists, that doesn’t seem too bright," Kane said. "One of the best passers and best guys with vision on the ice to ever play the game. Just shows a lot about his hockey knowledge and hockey IQ. Clearly it’s lacking."

He also suggested that the WWE would be a better fit for Reaves, saying that "for a guy who plays three-and-a-half minutes a night, he sure does a lot of talking. I think he thinks it's the WWE. He's probably going to end up there pretty soon with the way his game looks. Another year left on his deal. I'm sure Vince McMahon will be giving him a call pretty soon."